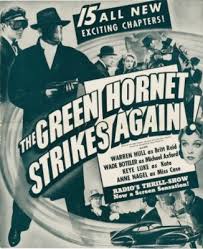 Britt Reid (Gordon Jones) is The Green Hornet. A masked vigilante hero that fights crime with his partner Kato (Keye Luke). To most of the public, and criminals, he is a criminal himself who steals from the bad guys to keep for himself. A view he promotes since criminals talk more to each other than to cops. In reality Reid is the publisher of a large metropolitan newspaper called The Sentinel. A job he inherited from his father. Again, to the public he is considered a lazy playboy who would rather party than report corruption. His father used the paper to write strong editorials against crime. Reid doesn’t appear to have the same convictions as his father. His secretary Lenore Case (Anne Nagel) is convinced of that.

Reid and Kato are on vacation in Hawaii. While he is away, his acting editor is murdered by a criminal known as Grogan. A move he made to have one of his men appointed in Reid’s absence. With his man in place, any of Grogan’s corruption schemes will be under reported.

Reid finds out about what is going on at the Sentinel. The return trip to the mainland proves difficult when henchmen from the syndicate try to kill him. Once finally on the mainland The Green Hornet and Kato get to work breaking every racket the syndicate has it’s fingers into. Each battle is fraught with danger and each one brings the Green Hornet closer to Grogan.

“The Green Hornet Strikes Again” was released in 1941 and was directed by Ford Beebe and John Rawlins. It is a 15 chapter serial and is a sequel to “The Green Hornet” released in 1940. It is Universal’s 117th serial and the 49th with sound. Although the bad guys are mostly the same throughout the serial, each chapter is a stand-alone story. The overall plot is racketeering and there are cliffhangers of a sort at the end of each episode. This is similar to the first Green Hornet serial. What holds each story together is the stories in Reid’s paper and the overall syndicate that is doing all the racketeering.

This time around the Green Hornet is played by Warren Hull instead of Gordon Jones. The other main characters are the same.

Serials are notorious for being done on the cheap. This one is no exception. That’s what stock footage is for. I like stock footage. It makes things exciting. Another cost saving devise for thls serial is the use of stock music. Mostly from classical composers. A little class with your comic book characters.

For some stupid reason they made Keye Luke have an Asian accent when he doesn’t. It was annoying. Unfortunately he is again under used. No good karate moves. As a matter of fact he ends up getting hit more than he should. Unless it’s just the more modern Katos that know all that self defense stuff.

I wasn’t nearly as annoyed with the hornet sound this time around. It wasn’t used as often as in the previous serial. As before the episodes are fast paced and enjoyable to watch.