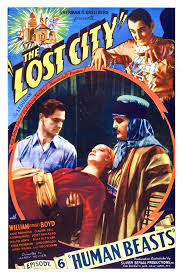 Catastrophes have been happening all over the world. Floods, electrical storms, ships sinking. Scientist Bruce Gordon (Kane Richmond) has been trying to find out where these anomalies originated. He is using a machine he invented called a Magnetic Detector to pinpoint where the activity is coming from. He has determined that the electrical disturbances are coming from the heart of Africa. Bruce mounts an expedition to find the source of the disturbance and stop it. As part of his team are Jerry Delaney (Eddie Fetherstone), Dr. Colton (William Millman) and Professor Reynolds (Ralph Lewis).

Arriving at an outpost run by Butterfield (George ‘Gabby’ Hayes) they learn from a man named Andrews (Milburn Morante) that the electrical activity must be coming from a place called Magnetic Mountain. Butterfield says it is a mountain of iron and acts like a lightning rod. Andrews insists there are unspeakable horrors on the mountain, including giants. Inside Magnetic Mountain is a scientific complex run by a mad man named Zolok (William Boyd). He is the last of a race called the Lemurians. Imprisoned there is Dr. Manyus (Josef Swickard) and his daughter Natcha (Claudia Dell). Zolok forces Dr. Manyus to create weapons of evil. One of his inventions turns men into mindless zombies. Another turns them into giants. Zolok, along with his henchmen, an Adonis looking Appolyn (Jerry Frank) and a hunchback named Gorzo (Billy Bletcher), is creating an army of giants and is responsible for all the electrical disasters all over the world. Zolok’s plan is to take over the world. Bruce, Jerry, Dr. Colton and Professor Reynolds get captured by Zolok. Eventually Bruce and Jerry escape with Natcha and Dr. Manyus. They aren’t free for long when they end up in the camp of Ben Ali (Gino Corrado). He is a slave trader that has heard of the giants. He wants them to sell. When he finds out that Dr. Manyus is the one who can make them he wants to use the Doctor just like Zolok did. Again they must escape. This time to run into a tribe of spider worshipers. At Butterfield’s trading post is Queen Rama (Margot D’Use). She also wants to have giant slaves. Her plans aren’t as lofty. She only wants to take over Africa. Butterfield tells her that the spider people have Manyus. She sends her Wanga warriors to get them and bring them to her. When they escape Queen Rama, Dr. Manyus and Natcha end up back in the clutches of Zolok. “The Lost City” was released in 1935 and was directed by Harry Revier. It is a twelve chapter science fiction serial. It is independently made by a production company called Super Serial Productions Inc. Many of the electrical wiz-bang contraptions were created by Ken Strickfaden. They were also used in “Frankenstein” (1931) and “Bride of Frankenstein” (1935). As for the serial Natcha is a useless twit. All she does is look bug eyed scared and wave her hands in the air. She’s skinny, plain, and looks a lot older than she is. And for some reason both the muscle-man Appolyn and the hunchback Gorzo want to marry her. Most likely because she’s the only white woman around. Now it was the thirties and a jungle movie so it’s just about as racist as you can get. All the blacks want to be white and all giant black slaves are grunting zombies. Otherwise it was a strange serial. They spent more time in the jungle bouncing from tribe to tribe than in the Lost City. It was fun and entertaining but the Lost City was pretty much lost from most of the chapters of the serial. A lot of the characters were either dropped or killed and at one time or another everyone was either a friend or foe. It ended up being not exactly what I expected. I thought it would be like Flash Gordon in the Jungle. Instead it was more like Jungle Jim in the Jungle. That’s fine since I’m a fan of Jungle Jim but the old switcheroo threw me for a minute. After the first chapter you don’t get back to the wiz-bang gizmos until chapter eleven. Everybody over acts. Queen Rama is somehow also the daughter of a slave trader and speaks with a French accent. The hunchback is a baritone and speaks with more clarity than the maniacal Zolok. Rumor has it he was dead drunk during his final raving mad scene. It explains a lot. Despite all the strange stuff, or perhaps because of it, “The Lost City” is a hoot. CHAPTER TITLES: 1. Living Dead-Men; 2. The Tunnel of Flame; 3. Dagger Rock; 4. Doomed!; 5. Tiger Prey; 6. Human Beasts; 7. Spider Men; 8. Human Targets; 9. Jungle Vengeance; 10.The Lion Pit; 11.The Death Ray; 12.The Mad Scientist.