adventures of captain marvel, the (1941) 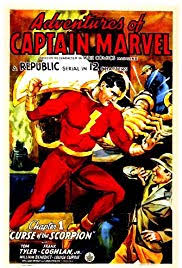 "The dynasty of the Scorpion will live again.”

An archaeological expedition is in the Valley of the Tombs looking for the secret of the Scorpion Dynasty. When the team finds a sealed crypt young Billy Batson (Frank Coghlan Jr.) obeys the warning on the crypt and does not enter the sealed chamber. The rest of the party ignores the warning and pries open the seal. Inside the chamber is a Golden Scorpion. While they are examining the devise they move its limbs. When the quartz lenses on the scorpion are aligned an explosion occurs.

The explosion revives an ancient wizard called Shazam (Nigel De Brulier). Since Billy is the only one who obeyed the warning and did not open the crypt the wizard grants Billy special powers. Whenever Billy repeats the wizard’s name, Shazam, he turns into Captain Marvel (Tom Tyler). With these powers Billy is charged with protecting those in danger from the curse of the Golden Scorpion. He is only to use these powers in the service of right.

The members of the expedition bring the scorpion out of the crypt along with an ancient scroll. The scroll instructs how to use the scorpion’s lenses to turn things into gold. It can also be used as a powerful weapon. Knowing that the scorpion is too dangerous a power to be in the hands of one person they split up the lenses among the group and give the scroll to Billy to guard. That way the scorpion can not be used unless everyone agrees to it.

Tyler, the guy who portrayed Captain Marvel, on the other hand was described as clumsy, and knocked over ‘props’ with his ‘lanky arms’. Also, in some scenes, his punches would actually connect. Tyler was, in real life, a weightlifting champion.

The effect of him flying in life action sequences was done by using a larger than life size dummy. The paper mache dummy had pulleys attached to it and was strung on two wires. The dummy basically moved on its own power across the camera’s field of vision from one end of the strung wires to the other. If Captain Marvel needed to fly upwards the cape was weighted and the dummy was then slid down. Then the film was shown in reverse.

The character of Betty Wallace (Louise Currie) is one of those rare women in films of the 40’s. She is smart, capable, daring and absolutely fearless.

As Captain Marvel Billy is endowed with the wisdom of Solomon, the strength of Hercules, The stamina of Atlas, the power of Zeus, the courage of Achilles and the speed of Mercury, in other words S H A Z A M.