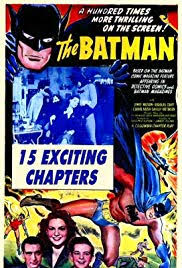 “Batman, clad in the somber costume which has struck terror to the heart of many a swaggering denizen of the underworld.”

As usual Gotham City is filled with crime. In charge of cleaning it up are The Batman/Bruce Wayne (Lewis Wilson), and his ward, Robin/Dick Grayson (Douglas Croft). The latest scourge is Dr. Tito Daka (J. Carrol Naish), the evil Japanese leader of a ring of saboteurs. Dr. Daka is working for the axis partners. Batman and Robin are secret government agents.

Dr. Daka kidnaps Martin Warren (Gus Glassmire). He is the uncle of Bruce Wayne’s girlfriend Linda Page (Shirley Patterson). When Warren refuses to help in Dr. Daka’s diabolical scheme the venomous doctor turns him into a zombie. Dr. Daka’s plan is to steal the city’s supply of radium to power his ray-gun. He has a hand held version that he uses to break into vaults and generally blow up stuff. He needs the radium to make a bigger weapon to blow up bigger stuff.

Every strategy that Dr. Daka takes in gaining the radium is countered by Batman and Robin. When Daka tries to kidnap Linda, blow up a train or steal a map to a radium mine Batman is there to thwart his plans. Unfortunately for Daka, his henchmen manage to lose the hand held ray-gun.

“Batman” was released in 1943 and was directed by Lambert Hillyer. This is the 21st Columbia serial and the first appearance of Batman on screen as well as the first DC comics character to have his own serial. Unfortunately for Batman, the serial was produced during WWII. Because of this Batman is a government agent battling a Japanese villain instead of his usual colorful evil doers. In essence “Batman” is propaganda. Complete with racial slurs which is an unfortunate sign of the times and a bit of history that shouldn’t be forgotten. Originally the villain was to be The Joker, hence the secret hideout at the amusement park. The change is most likely to boost moral during the war. As I said, Batman is propaganda.

Outside of the blatant racism, the serial wasn’t all that bad. The actors playing Batman and Robin weren’t exactly memorable and Naish looked more like an Italian playing a Japanese than anything else. Other than that there’s a lot of action and a variety of different cliffhangers. And of course at least one fist fight per episode.

The serial introduced the concept of Batman's underground headquarters. Referred to as "the Bat's Cave," which was adapted into the comics as the Batcave. In the serial Batman rides around in a regular car instead of the fancy batmobile. At the time the serial was done Batman had only had the batmobile for a couple years.

Batman co-creator Bob Kane makes a brief cameo as the newsboy in Chapter One, yelling, "Read all about the Batman!" before handing a paper to Bruce Wayne.