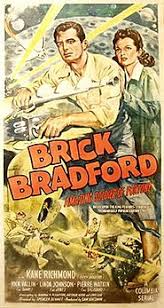 World-famous adventurer, soldier of fortune and time machine traveler Brick Bradford (Kane Richmond) is assigned by the United Nations to assist and guard Dr. Tymak (John Merton). Tymak is a scientist and inventor who is developing a missile-interceptor ray that is able to destroy in-coming rockets. Unfortunately it can also be used as a death ray. Because of its potential for evil it has garnered the attention of the sinister Dr. Laydron (Charles Quigley).

Tymak’s invention is run by a substance known as Lunarium. Other than a small amount that was found in a meteorite, the only place where it can be found is on the Moon. Tymak has a few tricks up his sleeve to avoid the bad guys and get a supply of Lunarium. Tymak uses his “Crystal” door into the fifth dimension to bring him to the far side of the Moon. Tymak is captured and brought to Queen Khana, the ruler of the Moon.

Brick and Professor Salisbury (Pierre Watkin) follow Tymak to the Moon. They are also captured but they escape and hook up with lunar exiles that live in the wasteland. Working with the exiles they overthrow Queen Khana’s forces and return to Earth with the Lunarium. Dr. Laydron is waiting when they return to confiscate the Lunarium.

In order to perfect his interceptor ray Dr. Tymak needs a certain formula. The formula is hidden in a pirate treasure somewhere in Central America that was buried 200 years ago. Brick and Sandy Sanderson (Rick Vallin) need to travel back in time to the year 1748 to retrieve it. To do that they use Tymak’s “Time Top” time machine. The Time Top spins them back in time to a tropical island. There they fight off pirates and island natives. The final third of the serial is spent back on modern day Earth with more entanglements with Laydron and lots of fist fights.

“Brick Bradford” was released in 1947 and was directed by Spencer Gordon Bonnet and Thomas Carr. It was the 35th serial released by Columbia Pictures. It was also the first of only three science fiction serials done by Columbia.

The plot sounded interesting so I was hoping it would be better than it was. There is a lot of silliness to the serial. Apparently on the Moon you can walk around and breathe as if there is air. And the surface looks a lot like the San Fernando Valley in California. That part I was OK with. Some parts, on the other hand, were slow. The music score was kind of cartoonish which didn’t add any thrills.

I think another part of the problem was breaking up the serial into the three parts using three different writers. It seemed the three parts were inconsistent with each other. Sort of a kitchen sink serial where each part was disconnected from the others. It lost its continuity. Although parts of it were good, all together it didn’t jell. The serial was OK, nothing more.

Chapter Titles: 1. Atomic Defense 2. Flight to the Moon 3. Prisoners of the Moon 4. Into the Volcano 5. Bradford at Bay 6. Back to Earth 7. Into Another Century 8. Buried Treasure 9. Trapped in the Time Top 10.The Unseen Hand 11.Poison Gas 12.Door of Disaster 13.Sinister Rendezvous 14.River of Revenge 15.For the Peace of the World