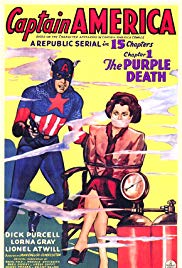 Evil villain “The Scarab”, who is in reality Cyrus Maldor (Lionel Atwill), has been killing the members of an expedition that has returned from investigating some Mayan ruins. The murders were all arranged to look like suicides. Maldor blames them for stealing his fame and fortune from the expedition. District Attorney Grant Gardner (Dick Purcell) is in reality Captain America. With the aide of his secretary Gail Richards (Lorna Gray) he is on the trail of the vicious murderer.

Foiled by Captain America, Maldor sets his sights on Professor Dodge’s “Electronic Fire Bolt.” With it Maldor and his henchmen can break into any safe or vault in the country. Time after time Maldor is stopped in his tracks by the heroic Captain America. The battle continues until the final showdown where the formidable Maldor is unmasked and Captain America triumphs.

“Captain America” was released in 1944 and was directed by Elmer Clifton and John English. This was the last Republic serial to be based on a comic book character. It also was Republic's 32nd serial. In 1953 the serial was re-released with the title of "Return Of Captain America".

In Captain America's original story, a man named Steve Rogers, who is too weak and puny to fight in World War II, is injected with a Super-Soldier Serum and develops an enhanced physique, after which he becomes Captain America and does battle with the agents of Nazi Germany. This back story was rejected by Republic during the making of the serial because it would have required costly retakes at the time. In the serial, Captain America's alter ego name is Grant Gardner. He is the city's district attorney and his foe is the Scarab, AKA Karl Maldor, played by Lionel Atwill.

This was both Captain America and Marvel Comics' (at the time called Atlas Comics) first movie. The film's production started in 1943, only two years after Atlas introduced Captain America in his first comic.

According to a 1974 magazine interview, Lorna Gray said there was a trident shield early in production, which was very heavy and difficult to use. Stuntman Dale Van Sickel injured another stuntman when he accidentally hit him in the face with it. Gray said that one of the strips on the shield kept coming apart, so the studio just discontinued using it.

Gail is actually a strong character. Even though she may need saving from time to time, she is a smart, capable and fearless woman. DA Gardner treats her with respect and as an equal.