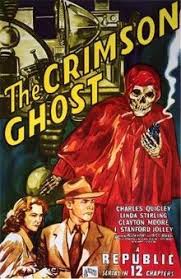 “He’s got more lives than a flock of cats.”

An evil master mind who calls himself The Crimson Ghost has his sights on the devise. With a gang of criminals led by head henchman Louis Ashe (Clayton Moore), the Crimson Ghost sets out to steal the weapon. The Crimson Ghost also uses a number of nifty toys. Among his arsenal are a record that emits knockout gas, a lock melting tool, an electric stethoscope, a hypnotic drug that makes zombie slaves out of those who are given it and a kill collar that explodes should someone other than the Crimson Ghost remove it.

When Dr. Chambers is kidnapped and his device stolen, the drug and collar are used on him to force him to build a bigger Cyclotrode. Chambers is not without his own toys. While pretending to build the larger Cyclotrode he actually makes a Ray gun that he plans on using against his kidnappers. Unfortunately Chambers gives his life to save Richards from accidentally getting ray-gunned.

Richards is a noted criminologist and enlists the aid of university secretary Diana Farnsworth (Linda Stirling) in his cat and mouse game with the dastardly Ghost. Richards too seems to have a flair with electronic gizmos. Of course when it comes down to it you can always pull out your trusty revolver and fire off a couple dozen rounds or so without loading.

“The Crimson Ghost” was released in 1946 and was directed by Fred C. Brannon and William Witney. It was Witney’s last serial. It is the 42nd Republic serial and it is also one of two Republic serials in the 1990’s that were colorized.

The plot is standard, lots of fist fights and the hero always goes blindly into each situation. Never are the cops called. The execution of the plot, however, is interesting. There is much more peril for the heroes than usual. The action sequences are varied and there’s more than one potential cliff hanger in each episode. Even the fist fights seem to be better choreographed than most serials.

Also Diana is absolutely the coolest. She’s a strong character that jumps from planes and cars and, although in peril herself more than once, never uttered a scream. She was ready and willing to help whenever needed and actually wears pants when tailing a suspect or pursuing a lead.

And last but not least is a vicious Doberman Pincher with the most adorable name of “Timmy”. What more could you ask for?