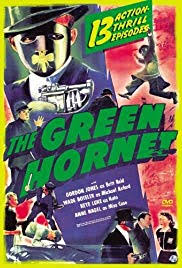 “That thing travels faster than the bullets I sent after it.”

Britt Reid (Gordon Jones) is a playboy and a publisher. He has inherited his father’s newspaper “The Sentinel”. In running the paper he has learned that crime is running rampant in the city. Wanting to do something about it he has taken on a secret identity as a vigilante crime fighter known as The Green Hornet. Along with his valet and chauffer Kato (Keye Luke) he investigates and exposes criminals and criminal activity.

The bad guys in this serial are a bunch of racketeers run by eleven different criminal heads and they all are getting orders from an unknown voice thru the office intercom of investor Curtis Monroe (Cy Kendall ). The unknown leader is referred to as “The Chief”.

The eleven organization heads have their fingers in a lot of pies. Everything from insurance fraud and extortion to election fraud and gun running. Just about an enterprise per episode. When the Green Hornet gets in their way, they frame him for everything.

I’m not sure how much help the Green Hornet really is. Granted he exposes all these crooked enterprises but cars still crash, trains still derail, planes still fall from the sky and buildings still burn down or blow up. Kato is also under used. He spends most of his time waiting by the car. Sure he made the gas gun and that cool car and he may karate chop a guy or two but that’s about it.

Even though Reid’s paper “The Sentinel” runs stories about The Green Hornet exposing corruption, the police believe that he is only exposing the criminals so he can take over their operations. The only one who really believes that the Green Hornet is a good guy is Reid’s secretary Leonore Case (Anne Nagel).

“The Green Hornet” was released in 1940 and was directed by Ford Beebe and Ray Taylor. It is a 13 chapter serial produced by Universal Pictures and is based on the “Green Hornet” radio series. It is the 45th serial they did during the sound era.

Even thought the Green Hornet is played by Gordon Jones his voice is dubbed by Al Hodge. Jones wears a full face mask instead of just an eye mask as in later movies. This makes the voice dubbing easier.

Keye Luke as Kato is Korean in the serial. There is much debate on what his heritage was during the radio series. Some believe he was Japanese and some maintain he was a Filipino. Urban legend says his nationality was changed from Japanese to Filipino due to anti-Japanese sentiment during WWII. The best I could find is that he had originally been Japanese and slowly evolved to be Filipino of Japanese Ancestry. Whatever that means. And that it had nothing to do with Pearl Harbor or WWII. At one point his nationality was dropped entirely. Suffice it to say in this serial he is Korean and Keye Luke himself was Chinese-born American and was a founding member of the Screen Actor’s Guild.

The episodes are fast paced with a lot of action. The plot is quite involved with all those criminal enterprises seemingly random at first, but eventually tied in to the voice on the phone. Add to it the fast tempo of the music, which I believe is “Flight of the Bumble Bee”, and the eventually annoying sound of the humming hornet and it can be a little confusing at times.