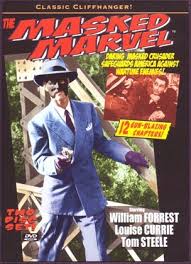 “Looks like somebody was out to break the World-Wide Insurance Company.”

During WWII Warren Hamilton (Howard Hickman) and Martin Crane (William Forrest) are executives with the World-Wide Insurance Company. There have been a lot of claims lately due to sabotage. It is believed the person responsible for the acts of terror is a Japanese spy master known as Mura Sakima (Johnny Arthur). The executives assign four insurance investigators to find and apprehend the villain. The four agents are Bob Barton (David Bacon), Frank Jeffers (Richard Clarke), Terry Morton (Bill Healy) and Jim Arnold (Rod Bacon). One of the four agents is reported to be the vigilante known as The Masked Marvel.

But Martin Crane is secretly in league with Sakima. He arranges the murder of Hamilton. Hamilton’s daughter, Alice (Louise Currie), becomes involved in aiding the agents and the Masked Marvel in finding Sakima and stopping his reign of terror. One of the four agents assigned to the case is the actual Masked Marvel. Hiding behind a black mask, no one knows who he is except Alice. He reveals himself to her, and only her. Why? Who knows?

Mura Sakima has two objectives in mind. Sabotage American industries and unmask the Masked Marvel. With the aid of Crane, and a never ending supply of traitors, Sakima wages his war. His head minion is a former racketeer named Killer Mace (Anthony Warde). The Masked Marvel and the other insurance investigators try to stop them at every turn.

“The Masked Marvel” was released in 1943 and was directed by Spencer Gordon Bennet. It was the 31st serial produced by Republic Pictures. Normally in serials the villain is not revealed until the last chapter. In this case, however, the identity of the main villain is known up front but the identity of the Masked Marvel is kept secret from the audience until the end.

Since there are potentially four guys that could be the Masked Marvel there are fist fights everywhere. There is, however, a grace to them, if you could call it that. The choreography for most of them is almost like a dance routine. Granted a violent one, but none the less they are laid out as if someone were about to bust out a chorus of “We are the Jets”. Well, almost. One other thing about the fist fights is that they happen everywhere. Roof tops, stairways, cellars, fire escapes, on top of trucks, on boats, in warehouses and in cafes.

Stunt man Tom Steele doubled for all four insurance agents as well as The Masked Marvel. He also played a couple of the thugs. The voice of The Masked Marvel was Gayne Whitman. The evil Japanese villain Mura Sakima is played by a white guy.

This was a fun serial. Some of the cliffhangers were quite exciting. There were lots of really good explosions (Thanks to the Lydecker brothers) and a few cliffhangers that were either a little different than normal or innovative in how The Masked Marvel gets out of them.