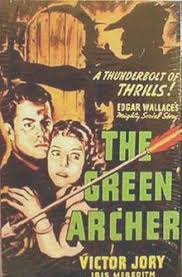 “Whenever a Bellamy found himself in serious trouble, legend has it that the green archer always came to his aid.”

Michael Bellamy (Kenne Duncan) was framed for murder. While being transported to jail his train is derailed and Michael is killed. This leaves the way clear for Michael’s brother Abel Bellamy (James Craven) to take over the family estate, including Garr castle. Abel uses the castle as a headquarters for his ring of thieves. Their specialty; jewels.

Michael’s wife Elaine (Dorothy Fay) figures out part of what Bellamy is up to. He kidnaps her to keep her quiet. Insurance investigator Spike Holland (Victor Jory) believes that Michael is innocent and plans on finding a way to prove it. Spike reports to Inspector Ross (Joseph W. Girard). Captain Thompson (Fred Kelsey) from the police is not much help in unraveling the clues or capturing the bad guys. Elaine’s sister Valerie Howett (Iris Meredith) and her father Parker (Forrest Taylor) arrive to try to find Elaine.

According to an old Bellamy family legend, whenever misfortune strikes the family, a mysterious figure called the Green Archer will appear to set things right. Abel is not above using this legend to scare away nosy people or just throw a monkey wrench into any investigation. One of his henchmen dresses up as the Archer, complete with leotard and mask, to throw Spike and Valerie off the trail. Unfortunately for Abel, a second Archer appears on the scene. This one tosses his own monkey wrench into things. This time to help the investigation instead of hinder it.

“The Green Archer” was released in 1940 and was directed by James W. Horne. It is the 12th serial released by Columbia Pictures. The serial is based on characters from Edgar Wallace's 1923 novel “The Green Archer”. Some of the plot elements and locations are also used but the story itself is original. This is the second adaptation of Wallace’s character. A silent serial had previously been adapted in 1925.

The Green Archer himself is not the main character of the story. Victor Jory’s manly investigator Spike does most of the fighting and is center stage most of the time. The Archer mostly sends notes attached to arrows and helps Spike get out of cliffhangers from time to time.

Garr castle has trap doors and secret passages, hidden rooms and caverns. Supposedly it is a replica of the Bellamy ancestral home in England. The castle adds a lot of playground for the bad and good guys to romp around it. Add in two Green Archers and some slapstick will ensue, not to mention a whole bunch a fist fights.

There are the usual plot holes and convoluted story angels. It takes a lot of twists and turns to fill up four plus hours of running time. Still the serial has lots of action and humor and, despite its short comings, is a lot of fun to watch.