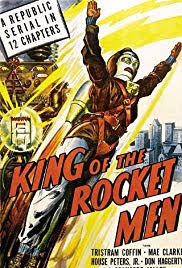 The evil Dr. Vulcan has a diabolical plan. With his gang of henchmen and remote control devises he is systematically murdering the members of the Science Associates. The Associates is a group of brilliant scientists working on a special project. He has already killed some of the professors. Vulcan plans on stealing atomic powered weapons and selling them to the highest bidder.

One scientist, Dr. Millard (James Craven), has had an attempt made on his life, but was saved by Jeff King (Tristram Coffin), one of the project members. Dr. Millard goes into hiding. He has been working on a project involving a special rocket propelled suit. The suit has an advanced rocket powered back pack, a leather jacket fixed with special controls and a bullet shaped helmet. Along with the suit Dr. Millard has developed a hand held ray gun. Millard gives the suit to Jeff to test. It’s not long before Jeff gets to try the suit out chasing a couple of Dr. Vulcan’s henchmen who have stolen a rocket propelled torpedo.

Reporter and photographer Glenda Thomas (Mae Clarke) becomes very interested in both Dr. Vulcan and the person she calls “The Rocket Man”. While trying to get information on the project she sees the Rocket Man in action. She takes a picture of him. Glenda finds herself embroiled in a deadly game of good versus evil.

While Dr. Millard continues working on his project, Jeff, as Rocket Man, thwarts Dr. Vulcan’s sinister plans. Jeff believes Dr. Vulcan may be one of the scientists in the group of Science Associates. Dr. Vulcan’s ultimate aim is to get a hold of Dr. Millard’s latest invention the Decimator. The decimator is a machine powerful enough to melt rock. In the wrong hands this weapon is capable of destroying anything on Earth and Dr. Vulcan manages to get his hands on it. If Dr. Vulcan’s demand of a billion dollars is not met, he threatens to destroy New York City.

“King of the Rocket Men” was released in 1949 and was directed by Fred C. Brannon. The Rocket Man character, well at least the suit, was used again in “Commando Cody and the Radar Men from the Moon” 1952, “Zombies of the Stratosphere” 1952 and “Commando Cody Sky Marshal of the Universe” 1953. The flying sequences were done the same as they were for “Adventures of Captain Marvel” 1941.

The serial has gotten some good vibes and some bad vibes. Some thought Mae Clarke as the heroine/damsel in distress was miscast due to her not being skinny, beautiful and young. Sexism at work. The low budget is another complaint stated by some. All serials are low budget and all use the same stock footage, props and sets. The plot was also trashed. I didn’t know serials had plots but OK, this serial’s plot was the bad guy always trying to steal something each week. Again, standard. There’s nothing here to explain why it is worse than any other serial.

As for the plus side we have lots of action, good flying sequences, a parade of cool names for the inventions that our kleptomaniac Dr. Vulture needs to steal, plus the hero is a scientist and not a detective, an alien with super powers or even a mild mannered reporter. Granted it’s not the best serial ever but it is the first Rocket Man.

Prolific stunt man Tom Steele not only doubled for Tristram Coffin but is credited with over 440 films in a career that spanned 50 plus years. He is also credited with over 200 acting credits. Stuntmen are often selected because of their resemblance to the star they are doubling for. Many of Republic Pictures' western stars in the 1940s and early 1950s were selected in part due to their resemblance to Steele, who would do their stunts.