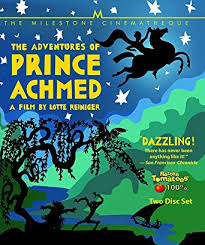 Achmed finally figures out how to land the horse. He ends up in a strange land called Wak Wak. There he finds many maidens who vie for his attention. When they begin to fight among themselves Achmed makes a hasty retreat. He ends up by a lake where he sees the beautiful Princess of Wak Wak, Pari Banu. He falls in love with the princess. Achmed manages to capture her and eventually she falls in love with him.

In the meantime the Sorcerer escapes and goes looking for Achmed. The Sorcerer manages to throw Achmed into a pit and absconds with Princess Pari Banu. He takes the princess to China and sells her to the Emperor. He then goes back to Achmed and traps him under a boulder on a volcano.

The Witch of the “Flaming Mountain” finds Achmed. When she finds out that the Sorcerer is involved she agrees to help Achmed as she and the Sorcerer are mortal enemies. They rescue Pari Banu but are then attacked by the evil spirits of Wak Wak. The evil spirits carry Pari Banu away. Achmed tries to follow but cannot get through the gates of Wak Wak. The Witch says the only way he can get through the gates is with Aladdin’s magic lamp. Achmed is dejected but he then rescues a man being attacked by a monster.

The man is Aladdin but he no longer has the lamp. Aladdin tells Achmed the story of how he got and lost the lamp. With the lamp he had a palace and the love of Princess Dinarzad. He blames the Sorcerer for stealing it. Achmed reveals that he is Dinarzad’s brother and that he too is at odds with the Sorcerer. The Witch agrees to battle the Sorcerer to try to get the lamp back and rescue the Princess Pari Banu. If the Witch fails she will die and so will Pari Banu.

“The Adventures of Prince Achmed” is a 1926 German animated fairytale film by Lotte Reiniger. It is the oldest surviving animated feature film. Two other animated films done by Quirino Cristiani are now considered lost. No original German nitrate prints of the film are known to still exist. The original film featured color tinting. Prior to restoration the only prints available were black and white. Working from surviving nitrate prints, several avant-garde animators worked on the restoration. German and British archivists restored the film in 1998 and 1999. The restorers used a method called the Desmet method to restore the tinting.

The animation technique to create the film was invented by Reiniger. It involves the use of cardboard cutouts covered in thin sheets of lead that are manipulated under a camera. It is a silhouette animation type technique. The camera method is similar to how Wayang Kulit shadow puppets are done only frame by frame instead of live action. The actual procedure to create the film reminds me of the stop motion technique used by artists such as Ray Harryhausen and Willis O’Brien only in a two dimensional form instead of with a rubber covered puppet.

Reiniger’s style has influenced more modern animators. Examples of her technique can be seen in Disney’s “Fantasia” 1940, “Lemony Snicket’s A Series of Unfortunate Events” 2004, and the short film “The Tale of the Three Brothers” that is in “Harry Potter and the Deathly Hallows Part 1” 2010.

The story itself is based on “The Arabian Nights” written by Hanna Diyab. The film is absolutely charming. Yes, the art of the piece is extraordinary and the technique innovative for its time but the real joy of the film is in how Lottie manipulates the caricatures. She has a way of bringing these pieces of cardboard and lead to life. They have emotion. Lottie is a better actor with paper than a lot of people are in person. It is thoroughly delightful.