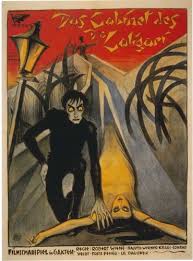 In the little town of Holstenwall, Dr. Caligari (Werner Krauss) is at the town clerk’s office applying for a permit to show his exhibit at the annual town fair. The town clerk is rude and degrading. Caligari is not one to forget the treatment he receives from the clerk. That night the clerk is found murdered.

In the meantime, Alan (Hans Heinrich von Twardowski) receives a flyer advertising the annual fair. Alan convinces his friend Francis (Friedrich Feher) to attend the event with him. One of the exhibits is called The Cabinet of Dr. Caligari. Caligari’s exhibit is Cesare (Conrad Veidt) the somnambulist. Cesare has been asleep for 23 years. Caligari is on stage talking about the young man. A curtain is drawn to show a cabinet. Caligari opens the cabinet. Inside is a tall thin man, looking pretty much like death warmed over. Caligari calls to him commanding him to awaken. Slowly Cesare opens his eyes.

The somnambulist is a sage. He knows all and sees all. Caligari invites questions from the audience. When Alan asks him how long he will live Cesare tells him “Till dawn tomorrow.”

On the way home they run into Jane Olsen (Lil Dagover). Both Alan and Francis are in love with her but they have decided that it is up to her to decide who to marry. They vow that they will still be friends no matter what. In the morning Alan is found dead.

Francis and Jane’s father (Rudolph Lettinger) believe that Cesare is responsible but the town’s people catch a suspicious man with a knife slinking around town. He is caught trying to kill an old woman. He is blamed for the murders. He says he planned on killing the old lady thinking that the murder would be blamed on whoever killed the other two people. He says he did not do the other murders.

Caligari, in an act of hatred, sends Cesare to kill Jane. When Cesare sees Jane asleep he falls in love with her and instead kidnaps her. Cesare is heard trying to make an escape with Jane and is chased. He puts her down and runs away.

When the police go to question Caligari he disappears into a madhouse with Francis in pursuit.

The film was written by Hans Janowitz and Carl Mayer. The biographies of these two men are even more bizarre than the film itself. The two men’s life experiences were a heavy influence on the story. Both were pacifists during the war. Mayer actually pretended to be insane to avoid service. Dealing with military psychiatrists gave him insight that he used to show a not so good light on the establishment. An actress that Mayer was in love with encouraged them to write together. She was the influence in the Jane character. Langer convinced Janowitz to go to a fortune teller who told him that he would survive the war but Langer would not. The prediction came true. This experience influenced the Alan character in the film. Another influence was a side show they went to at a circus where a man was hypnotized to do feats of strength. Janowitz’s home town was near an amusement park where Janowitz observed what he later came to believe was a woman just prior to her being murdered. They both also had a strong distrust of authority.

The style of the film is basically German Expressionism. This is the precursor to the noir trend. What better way to frame insanity than to show visual effects that are not quite right. Windows that are crooked, rooms and buildings that slant on an angle, twisted tree branches, shadows and unusual angles of light. Everything out of proportion and filled with chaos. Though everything to do with the background is stylized, the low budget also influenced the make-up of the sets. The backdrops were painted on paper right down to the sunlight streaking through painted on windows.

In all, the film is a riot of images. Everything about it transports the viewer into an alternate universe of horror. It’s a taste of what goes on in the mind of two writers who are telling the story of their lives in a way that bares their souls.

I recommend this film highly. A good restoration was done by Film Preservation Associates in 1996. The music score was written and conducted by Timothy Brock.