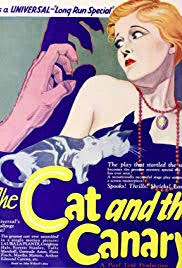 “Medicine could do nothing more for Cyrus West, whose greedy relatives, like cats around a canary, had brought him to the verge of madness… “

Cyrus West has been dead for twenty years. His final wish is that his last will and testament be locked in the safe and unread until the 20th anniversary of his death. At that time all his heirs are to be assembled in his mansion and the will to be read at midnight. West’s lawyer Roger Crosby (Tully Marshall) has called together the following people: West’s housekeeper Mammy Pleasant (Martha Mattox), his three nephews Harry Blythe (Arthur Edmund Carewe), Charlie Wilder (Forrest Stanley), and Paul Jones (Creighton Hale). Also to be in attendance, his sister Susan Sillsby (Flora Finch) and his two nieces Cecily Young (Gertrude Astor) and Annabelle West (Laura LaPlante).

Crosby opens the safe where the will is held and discovers that someone has already been into the safe and has read the will and an accompanying will. The first will names Annabelle West as the sole heir of the estate with the requirement that she be examined by a doctor, Ira Lazar (Lucien Littlefield). Should the terms of the first will not be met or if the doctor pronounces her insane then the estate would go to the person mentioned in the second will.

Mammy Pleasant gives Annabelle a letter that Cyrus had given her to hold. She tells Annabelle that she must read the letter when she is alone in Cyrus’s bedroom. Later when reading the note she is instructed to find the West family diamonds hidden in a panel near the fireplace. At dinner a guard from the local insane asylum shows up and tells everyone that an inmate has escaped. He thinks he is a cat and he tears his victims apart. The guard investigates the house and wanders around the grounds.

After dinner Crosby tells Annabelle that someone has read the second will. He is about to reveal the person’s name when a shadowy figure grabs him and takes him behind a hidden panel in the wall. Later that night while Annabelle is trying to sleep a hand comes out of a wall panel and steals the diamonds. Most of the household now believes that Annabelle is insane until Crosby’s dead body is found when another hidden panel opens up and Crosby’s body falls out.

“The Cat and the Canary” was released in 1927 and was directed by the German Expressionist Paul Leni. Produced by Carl Laemmle, it is a silent film and a black comedy. The movie is based on the stage play “The Cat and the Canary” by John Willard. It is one in a long line of the sub-genre “Old Dark House” mysteries. This is the first in a line of at least five other film adaptations of the play.

The cat and the canary reference comes up a few times in the story. The first is the very beginning where Cyrus West feels like a canary and his heirs are cats waiting to pounce on him for his money. The next is when Annabelle is named heir and the estate attorney tells her that she is now the canary and the other heirs are the cats. Then again when the guard at the insane asylum says that the escaped lunatic thinks he is a cat and he tears apart his victims like they were canaries.

I like this version of the story. The splashes of German Expressionism in the composition of the sets add a creep factor that is quite intriguing. It’s not overly done. Just enough to tantalize a basic Old Dark House mystery. The interjection of the German Expressionism is the genius of the director Paul Leni. Blending it with not only horror but comedy as well makes the film stand out in all of its genres.