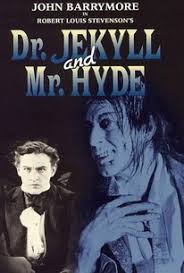 “A man cannot destroy the savage in him by denying its impulses. The only way to get rid of a temptation is to yield to it.” (Oscar Wilde)

The young Dr. Henry Jekyll (John Barrymore) spends most of his time either in his laboratory trying to discover the hidden wonders of the world or at a clinic for the poor curing the sick. Millicent Carewe (Martha Mansfield) is in love with Jekyll and waits patiently when he is running late for whatever reason. Millicent’s father Sir George Carewe (Brandon Hurst) believes he is looking out for his daughter when he questions Jekyll about his altruistic endeavors.

Carewe is a bit of a cynic and firmly believes that men are basically dogs. He unknowingly fires up a curiosity in Jekyll concerning the good vs the evil in people. Carewe believes there are two sides to a man, the good and the bad. Jekyll begins making experiments to see if he can separate the two parts of the human psyche. After researching and experimenting he develops a drug that he believes will bring out the evil side of a person. He then experiments on himself. The drug transforms him into an evil and hideous caricature of a man.

He begins to roam the seedy parts of London partaking in all kinds of depravity. He calls this alter ego Mr. Hyde. He begins to lead a double life. The mild mannered and compassionate Jekyll and the evil Hyde that corrupts whatever he touches. He tells the servants the Mr. Hyde is to have the run of the house so he can come and go from his laboratory as Mr. Hyde without question. He also rents a furnish room away from anyone he knows. He brings an exotic dancer Gina (Nita Naldi) to live with him. When he is sick of her he throws her out. Each time he takes the drug he becomes physically uglier and meaner. When he tramples a child and kills it he pays off the parents as compensation.

His friends are worried about Jekyll’s association with the demonic Hyde. Carewe finally goes to see Jekyll to complain. He doesn’t understand why Jekyll is associating with this Hyde person and is not happy that he is anywhere near his daughter. He tells Jekyll that if he continues his acquaintance with Hyde, Carewe will not permit him to marry his daughter. They argue. While in the midst of the argument Jekyll turns into Hyde in front of Carewe. Now discovered Hyde kills Carewe and flees. Hyde and Jekyll are now on a downward spiral that Jekyll fears he may never be able to stop.

Jekyll wanted to see if man could experience whatever he wanted without affecting the soul. He was corrupted from the first instance he took the drug. He told his servants to allow Hyde the run of the house and he went out specifically to find lodgings for Hyde where he could experience his debauchery in private. He did these things as Jekyll. In doing that Jekyll has already tarnished his soul.

In some ways the character of Sir George Carewe is similar to that of Lord Henry Wotton in “The Picture of Dorian Gray”. He knows how to manipulate people and seems to take some enjoyment out of corrupting the young and handsome and bringing them down to his level. It seems a stupid thing to do with someone who will be marrying your daughter but I’m not sure Carewe can help himself.

There were two American Jekyll and Hyde movies released in 1920. Released just a month later, the other was only about 40 minutes long and was overshadowed by the Paramount and John Barrymore double whammy of this film. There was also a third film released that year. It was a German film directed by F W Murnau.

The film seemed a little slow at first. When you get to the transition phase and see Barrymore in action is when the movie becomes a real horror film. Barrymore transitions from the pure Dr. Jekyll to the diseased Mr. Hyde in front of your eyes. The transition technique on film is the dissolve technique, but Barrymore plays the Hyde character with abandon to the point where there are times you are not sure it is the same person playing the part. The first time Barrymore transforms into Hyde he does it with no make-up. All of the facial expressions are purely Barrymore’s acting talent.