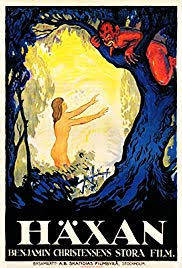 “Haxan” is a silent movie. It was released in 1922. Benjamin Christensen wrote and directed the film. Christensen was a Danish filmmaker. In 1919 while in a Berlin bookshop he came across a copy of the “Malleus Maleficarum”. The Maleficarum is basically a how-to book of witches. How to identify them, how to torture them and how to dispose of them.

The Maleficarum was written in 1487 by a discredited Catholic clergyman and self proclaimed inquisitor named Heinrich Kramer. With this book Kramer would travel Europe and in each village and hamlet he visited he would offer to clear it of witches. It is said that there were towns, especially in Germany, that when the inquisitor left the village after identifying and disposing of witches, there were no women left in the town. Every woman, young and old, was deemed a witch, tortured and killed. The Maleficarum is what gave rise to the inquisition. It was the bible of movement.

Christensen spent the next two years studying witchcraft. His view was to make a new kind of film that would explore the subject. It is a study of how the idea of witchcraft came about and how mental illnesses and diseases can be morphed by fear and superstition to be labeled as witchcraft. The film is basically in seven chapters.

Chapter 1. A lecture about the beliefs of different civilizations. How they saw the universe. The advent of superstitions by cultures to explain the mysteries of the unknown. Then the evolution of witches and demonology in medieval times. Through the use of tapestries, woodcarvings, paintings, etchings and sculpture Christensen illustrates his thesis on superstition.

Chapter 2. This section is a bunch of little stories acted out to illustrate various beliefs and superstitions. Christensen plays the devil.

Chapters 3, 4 and 5. Tells a story with two parts about the inquisitors. The first part is about an old woman who was accused of being a witch. She is tortured until she confesses various bazaar rituals she supposedly did. Then she names others as witches. People she doesn’t like. The second part is about one of the monks who has sexual fantasies about a woman, so she is accused of being a witch and tortured.

Chapter 6. This section has some cute little scenes about various torture devices and how they are used. Then there is a little vignette about a nun sleepwalking and mass hysteria at a nunnery.

Chapter 7. In this last section Christensen brings us into the current day. At least the 1922 current day where many behaviors that were once thought to be witchcraft were actually illnesses, either mental, chemical or physical. Even deformities could label someone a witch. Various forms of these issues are illustrated; pyromania, sleepwalking, kleptomania and other illnesses.

Altogether “Haxan” is a lavish and spectacular documentary on witchcraft and its origins. Based on the data available in 1922 Christensen did the best he could with correlating modern illnesses with medieval beliefs. Modern medicine in 1922 called everything hysteria and recommended putting someone in an institution. This is something that Christensen points out so, even back then he realized that, even though by 1922 society had come a long way, it still had a ways to go.

We have advanced a little further since then but there are still those that fear what they do not know and those that do not get the attention they need for whatever haunts them. There are still superstitions that afflict us. Some are silly like walking under a ladder or fear of Friday the 13th. Some are more serious like the fear of someone who looks different than us or has a different religion or different sexual orientation. The best we can hope for is that with more education even these fears can be overcome. Knock on wood.