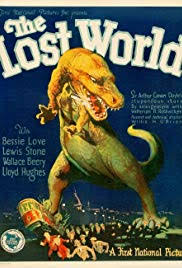 Professor Challenger (Wallace Beery) has returned from South America with a wild tale. He reports the existence of dinosaurs on a plateau. Unfortunately all his notes were lost when his canoe tipped over. Since his colleagues call him a fraud and do not believe his tale, he intends to make another trip to the plateau to prove his claims. This first trip was done based on a journal written by an explorer named Maple White. His daughter Paula White (Bessie Love) provided the journal in hopes of finding her father.

To get financing for the trip from a newspaper he agrees to label it as a rescue mission. He has secured a small group to accompany him on the expedition. Along with Challenger are Paula, big game hunter Sir John Roxton (Lewis Stone), newspaper reporter Edward Malone (Lloyd Hughes), skeptic Professor Summerlee (Arthur Hoyt), an Indian servant Zambo (Jules Cowes)(unfortunately in black-face), Challenger’s butler Austin (Frank Finch Smiles), and a small spider monkey named Jocko (Jocko the monkey).

They make camp at the base of the plateau. While camped they are attacked by an Apeman that hurls rocks down at them. They also see above them a Pteranodon. Leaving Zambo and Austin at the base camp the remaining party climbs a rock face and crosses a chasm with a make shift bridge from a felled tree. The tree is knocked over by a Brontosaurus trapping the party members on the plateau.

Now they are stranded in this hostile environment. They are surrounded by dinosaurs of every kind, and there is an Apeman trying to kill them. With no weapons other than a couple rifles and no food or shelter they must find a way to survive. Unless they can find a way off the plateau they will be stuck there forever.

They find a cave for shelter and fashion a catapult from some saplings. The search goes on for Paula’s father Maple White. Roxton finds his remains. It’s then when the formerly dormant volcano at the top of the escarpment decides to come awake.

“The Lost World” was released in 1925 and was directed by Harry O. Hoyt. It is based on the novel by Sir Arthur Conan Doyle written in 1912. The dinosaurs in the movie are stop motion animation done by Willis O’Brien. The original movie was a 10 reel film. It was somewhere between 104 and 108 minutes long. At one point, due to legal reasons, all known copies of the film were destroyed. Authorization was made for an abridged 5 reel film to be issued.

Through the years pieces here and pieces there were located. A nearly complete version was found in Czechoslovakia. In 1997 The George Eastman Museum unveiled a nearly complete film. Still about 1200 feet of film was missing. More bits and more pieces later a 96 minute film was included in the 2007 20th Century Fox DVD of the 1960 Irwin Allen re-make. There were a couple more versions to come. Flicker did a reconstruction and restoration resulting in a 2015 version of 93 minutes. Another version was done in 2015 and 2016 each time with more found film. The last update I am aware of is the Flicker 2017 version that is 110 minutes. A little strange since the original movie was supposedly 108 minutes long max. Some deviation may be due to film speed and the length of time an insert card is viewed for those who are slow readers. Other versions, restorations and updates had been done in-between but the best versions out there appear to be the 1997 version the 2016 version and the 2017 version. Also with each version, music scores get redone using different composers. The best version I could find is the 2016 version.

These restored films are utterly amazing. The clarity is extraordinary and the tints are rich. With the restored footage the transition between scenes makes more sense. The movie flows and subtle insights about the characters and the scenes are more developed making the film even more enjoyable. Willis O’Brien’s stop motion techniques are on display. The dinosaurs are more alive. Even the stock footage looks good. It is a treat to watch.