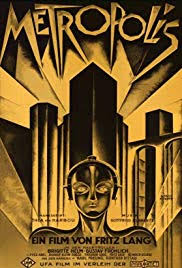 “The mediator between head and hands must be the heart.”

It is 2026. Metropolis is the city of the future. The top echelon from the world of business runs it. The one percenters. The head of the city is Joh Fredersen (Alfred Abel). While his son Freder (Gustov Frohlich) frolics high above the masses, the working class toil down below ground making sure that the machines that run the city do not stop. While Freder is idly amusing himself a woman named Maria (Brigitte Helm) appears with a group of children in tow. She tells the children that these wealthy elitists are their brothers. She then looks Freder in the eye and tells him that the children of the underground are his brothers.

The effect this statement has on Freder is profound. He goes down into the lower levels of the city to find Maria. What he sees is masses of people toiling away keeping the machines going. One of the machines explodes and workers are killed. They are taken away and more men are brought in to man the machines. Freder runs to his father to tell him about the explosion and the dead workers. His father is less than sympathetic. Freder is appalled and decides to help the workers. He secretly trades places with one of them.

The foreman of the workers, Grot (Heinrich George), brings Fredersen a couple maps he got off of some of the dead workers. Fredersen goes to see the inventor Rotwang (Rudolf Klein-Rogge) for advice. Unknown by Fredersen, Rotwang has a grudge with Fredersen. He was in love with Hel. She married Fredersen and died in childbirth with Freder. He shows Fredersen a robot he built to replace Hel. He then tells Fredersen the maps are to the catacombs deep underground. He takes Fredersen down there where they find a group of workers gathered around to listen to Maria. She tells them the story of the city of Babel and then prophesizes that a mediator will one day come to unite the workers with the ruling class.

Freder is also there listening to her words. He secretly believes that he may be the one they are waiting for. His father, listening in, has other ideas. He instructs Rotwang to make his robot look like Maria. He will then use it to tear apart the hopes of the workers and bring them back in line. Rotwang secretly believes that it will also tear apart any remaining bond between father and son, and perhaps more for Fredersen does not control the Maria robot, he does. His revenge is close at hand.

“Metropolis” was released in 1927. The movie was directed by Fritz Lang and written by his then wife Thea von Harbou. It is a German Expressionist science fiction film. There have been 5 restorations and 8 versions of different lengths. This included the Moroder version that used music from popular rock and roll artists. The original movie was 153 minutes or 2 hours and 33 minutes. The final restoration in 2010 was 148 minutes or 2 hours and 28 minutes long and included the original score. It is considered the world’s first feature length science fiction movie.

The Maschinenmensch or machine man was played by Brigitte Helm and not a stunt woman. The robot visual is used the most in all the publicity for the movie despite the fact that the Maschinenmensch appears for only a few seconds in a couple places in the whole two and a half hour film.

The special effects are amazing. Stop motion, forced perspective, miniatures, double exposures, lighting, camera angles as well as mirrors were some of the effects used to create the film. The robot costume was created by sculptor Walter Schulze-Mittendorff. He created a whole body cast of Brigitte from plaster and built the robot around it from plastic wood. A new discovery used as wood filler. It was then spray painted to appear metallic. It was the inspiration for the character C-3PO.

Reportedly the film used 25,000 to 37,000 extras. 500 to 750 children were used for the flood sequence. Malnourished children were easy to come by in Germany at the time.

The combination of the over whelming visuals and multiple themes and symbolism of the film seems to have been lost on many 1920’s movie goers. Now with the film almost complete more nuances can be plucked out and admired today.

Fritz Lang was Jewish; however, to Lang’s dismay, Adolf Hitler and Joseph Goebbels were big fans of the film. Goebbels told Lang that he could be made an honorary Aryan despite his Jewish background. Goebbels told him "Mr. Lang, we decide who is Jewish and who is not." Lang supposedly left for Paris that night. At least that is his rendition.