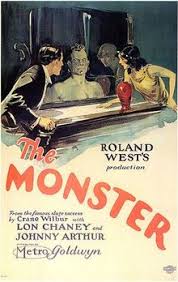 Bowman’s disappearance was Danburg’s biggest thrill since the milkman eloped with the bootlegger’s wife.

Johnny Goodlittle (Johnny Arthur) is a store clerk and in love with the bosses daughter Betty Watson. Johnny has big plans. He wants to be a detective. He’s knows he’ll be a good detective. He’s been taking a correspondence course and he’s got a book. When wealthy farmer John Bowman goes missing Johnny knows he can help.

He finds a piece of paper in the garbage heap near the sanitarium. On it is scribbled the word HELP backwards. The constable Russ Mason (Charles Sellon), along with Johnny’s rival for Betty, Amos Rugg (Hallam Cooley), just laugh at him. Betty tells him he needs to do something big to get their approval. When Johnny’s diploma from the detective school comes in the mail it includes handcuffs, a badge and a gun.

Amos also works at the general store along with Johnny. To impress Betty he takes her for a drive. Johnny wanders around feeling sorry for himself until he stumbles on a trap near the sanitarium and finds himself inside. A storm comes up. Amos and Betty end up in another trap and have an accident with the car. Since they are in front of the Sanitarium they go there for help. All three are now stuck in Dr. Edwards’ sanitarium.

They are greeted by Dr. Gustave Ziska (Lon Chaney). He says he is covering for Dr. Edwards while he is away. Unknown by the three, Ziska is actually a patient and has taken over the asylum. He is using people he lures into accidents on the road as test subjects for his insane experiments. Betty would make a perfect test subject for his next experiment.

“The Monster” was released in 1925 and was directed by Roland West. It is a combination mad scientist and old dark house movie. It is also a comedy/horror movie, which I suppose is its own sub-genre. It is based on the play of the same name by Crane Wilbur.

Views on the film are mixed. Even though he is top billed, Chaney Sr. doesn’t show up until at least a half hour into the film. When he does he’s a little creepy but not ghastly like in many of his films. So if you are looking for big time monster make-up effects look elsewhere. If you are looking for a basic fun time dark comedy, this has all those aspects. It’s not a great movie or a bad movie but it’s a nice little film.

The movie is also not well known. In that respect, as far as I could tell, it hasn’t had a big restoration. Some parts of the film are clear but some sections are a little dark and fuzzy. It could use a decent cleaning, at least the ones that I could find. It’s unfortunate it hasn’t since it is a Chaney vehicle. He did this film the same year he did “Phantom of the Opera”.