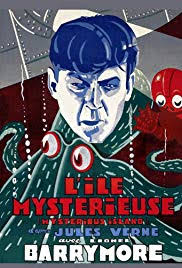 Count Dakkar (Lionel Barrymore) governs a society on a volcanic island near the kingdom of Hetvia. On his island all residents are considered equals. Dakkar and his sister Sonia (Jacqueline Gadsden) live peacefully and harmoniously with the other inhabitants of the island. Dakkar has designed and is building an underwater vessel. A submarine. One is completed and ready to be tested. The other is almost done. Sonia is in love with one of the ship’s builders Nicolai Roget (Lloyd Hughes). Dakkar’s friend Baron Falon (Montagu Love) is also in love with Sonia and is outraged at the attention she is getting from the man he considers a commoner.

On the day of the test run Roget is allowed to pilot the ship and test its systems. While the submarine is going through its maneuvers the island is invaded by Baron Falon and his Hussars. Falon has taken over the kingdom of Hetvia and is now trying to do the same with Dakkar’s island. His aim is to get his hands on the submarine. He knows that it can be used as a powerful weapon and with it he can command the world.

Falon lays in wait for the submarine to surface. Before Falon and his me can swarm it Roget sees what is happening and submerges the ship. Roget dons an underwater suit and managed to smuggle Dakkar away Falon and onto the ship. Sonia, on the other hand is nowhere in sight. Falon tries to lure the sub using Sonia as bait. Falon bombs the submarine and it sinks to the bottom of the ocean. Sonia manages to get aboard the second ship but Falon is right behind her. She sabotages the vessel so that Falon cannot use it. It too sinks.

Both ships, now at the bottom of the ocean, are in a wondrous world of strange giant creatures and a race of humanoid beings no one in the world above has ever seen before.

“The Mysterious Island” was released in 1929 and was directed by Lucien Hubbard, Maurice Tourneur and Benjamin Christensen. It wasn’t actually based on the general Mysterious Island story but on the back story given about Captain Nemo and how he came to be Nemo. It is more in the lines of a prequel to “20,000 Leagues Under the Sea”.

This is a unique film. The production was started in 1926 as a silent film. Various problems put a hold on production several times. It took about three years to finally finish the movie. By that time talkies were the rage. Footage directed by Maurice Tourneur and Benjamin Christensen done in 1927 was combined with everything else they had and blended into the footage done by Hubbard. Newer portions of the film were done with sound. Of the silent part some synchronized sound effects were added and some parts just had scored music like most silent films. This resulted in a hybrid of the two styles.

The film was also largely two-color Technicolor. Until recently only one reel of the two-color film was known to have survived. An existing color copy was found in Prague in 2013. Apparently the Czechs squirreled away a lot of American movies that had been shown in the various movie houses so that the Nazi’s couldn’t get a hold of them. The US and the Czech National Film Archive restored the color print, however only the un-restored black and white print is available.

It is Important mostly for its historic value than its entertainment quality. The movie is fine. Good acting and special effects but if you’re looking for the sea monsters and the sea people you’ll have to wait. They only show up in the last 15 or so minutes of the film. The spliced together talkie vs silent vs sound effects is a little strange but kinda fun. And very odd. Something to see as a curiosity and as a historical transition between two eras.