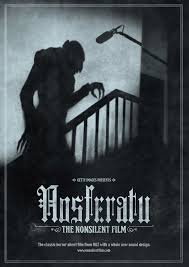 “It’s still quite a long time until sunrise and I sleep by day, dear fellow… completely dead to the world…”

Thomas Hutter (Gustav von Wangenheim) is a real estate agent living with his wife Ellen (Greta Schroder) in the little town of Wisborg. His boss, Herr Knock (Alexander Granach), comes to him one day and tells him that he must go to Transylvania to complete the sale on a house for Count Graf Orlok (Max Schreck). Since this sale will mean more money for his family he leaves his wife in the care of his friend Harding (Georg H. Schnell) and Harding’s sister Annie (Ruth Landshoff).

Once in Transylvania Hutter stops at an inn for dinner but ends up staying the night. When Hutter mentions the name Orlok the town folk react in fear. They warn him of werewolves in the area and tell him that travel at night is dangerous. In the morning he continues on his way. When the coach gets to the bridge to the Count’s estate the coach refuses to go any further. Hutter begins to walk but a black coach appears to take him to Orlok’s castle. Orlok is waiting for Hutter and offers him food and refreshment. While slicing a loaf of bread Hutter cuts his thumb. The Count’s reaction is to try to suck the blood from Hutter’s finger. Hutter is revolted by the thought. Orlok already looks like death and the thought of being touched in any way by the Count is sickening.

Hutter wakes in the morning not remembering what happened the night before, but he has two puncture wounds on his neck. Orlok signs the documents purchasing the house that Knock recommended. A house across from Hutter’s home. When Orlok sees a photo of Hutter’s wife he remarks about how lovely her neck looks. Eventually Hutter figures out who the Count really is, but by that time the Count is off on a ship headed for Wisborg. All he can do is race home to his wife.

One by one the Count drains the blood from the ship’s crew until all are dead and the death ship slides silently into the harbor. The authorities find the ship and determine that a plague is on board, but this plague is in the form of a vampire and it appears there is no cure.

“Nosferatu: A Symphony of Horror” was released in 1922 and was directed by F. W. Murnau. It is a German Expressionist silent horror film. The film is based on Bram Stoker’s novel “Dracula”. It is an unauthorized adaptation and as such names were changed from what is in the novel. Even the word vampire was changed to nosferatu. The word nosferatu is supposedly synonymous with the word vampire and is also reported to be a Romanian word. Whether it actually did or not is immaterial since, after the popularity of the film, it does now. The filmmakers, Prana Films, never got the rights from Stoker’s heirs to make the film. Stoker's wife Florence sued and won. Prana Films declared bankruptcy rather than pay. The courts declared that all known copies of the film were to be destroyed, however, the film had already been distributed and some copies survived.

As with a lot of old silent films there have been restorations done and re-releases. With “Nosferatu” the last restoration was done in 2006 and the last release was in HD done in 2013 on blu-ray. The 2006 restoration shows excellent tint and clarity. The HD digitizing brings out an extra nuance to the film. The music score done was the original score crafted by Hans Erdmann in 1921 and conducted by Berndt Heller in 2005.

The movie was banned in Sweden until 1972 because of excessive horror. This film is the first to use the plot devise of using sunlight to kill a vampire. Count Orlok only blinks once. It’s near the end of Act One.

As for the film, what can I say, vampires are sexy. Even snaggletooth, rat faced, cadaver-like monsters with nine inch nails.