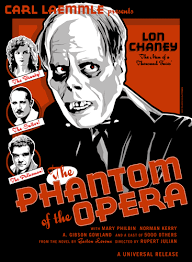 “Feast your eyes… glut your soul, on my accursed ugliness.”

The new owners of the Paris Opera House have just been told about a ghost that haunts the building. They laugh until they see a shadowy figure in box five of the theater. The phantom (Lon Chaney) has become enamored of Christine Daae (Mary Philbin), the understudy of the star of the production Carlotta. He sends a note to Carlotta warning her. If she doesn’t let Christine sing in her place her career will be in jeopardy. The note is ignored and Carlotta becomes ill. Christine goes on in her stead and is a hit.

Raoul de Chagny (Norman Kerry) is also in love with Christine. He wants her to marry him. She tells him she cannot abandon her career. When Raoul leaves a voice comes from the walls telling Christine she must focus only on her career and her master. The Phantom again warns Carlotta not to perform but she does anyway. The Phantom drops a chandelier on the audience. He then lures Christine into the catacombs beneath the opera house.

He expresses his love for Christine but when she removes his mask she screams in horror at what she sees. She begs the Phantom to let her go. He agrees on the stipulation that she never see Raoul again. She agrees but when she is safely above ground she returns to Raoul for comfort. The Phantom is furious and kidnaps Christine bringing her into the depths of the catacombs. Raoul and Gen darme Ledoux (Arthur Edmund Carewe) must search the bowls of the opera house to find her before the Phantom turns violent.

“The Phantom of the Opera” was released in 1925 and was directed by Rupert Julian. It is a silent movie based on the novel by Gaston Leroux. Its success ushered in a chain of horror movies that Universal became famous for.

When talkies came, Universal wanted to do a sequel to The Phantom but couldn’t get Chaney. They opted to reissue The Phantom with a new synchronized score and effects track instead. Some footage was reshot for the update. The film produced in 1930 ended up being a hybrid half sound, half silent.

There is some controversy about how long the original film was. The restored 1927 film is shorter. Between the original, the talkie and the restored version some mix and match as well as cut and paste had to be done since there are no original prints known to have survived. Some bits and pieces are believed to be lost altogether. Most of the prints were melted for their silver content. Still what has been put together is a pleasure to watch.

Seeing the film restored you get a lot more of the nuances of the story. There is quite a bit of humor in with the scary stuff. The creep factor is also kicked up a notch. There are some very impressive scenes that are more intensified by the restoration. The chandelier, the masked ball and the unveiling of the Phantom’s face are most prominent. The restoration of the tinted scenes and the colored scenes gives the film the feel of a sweeping epic.

The restored 1929 silent and 1930 talkie have both been restored with various music scores available. One of the scores appears to have been influenced by the Andrew Lloyd Webber stage production of the story. It’s an interesting touch.