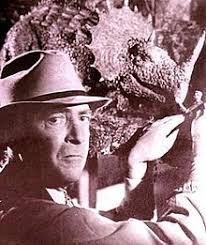 O’Brien was a pioneer in the field of stop motion animation. His work inspired film makers and animators for decades. His ground breaking work on “King Kong” influenced Ray Harryhausen to embark on his own career as an animator. O’Brien created several stop motion shorts for the Thomas Edison Company in addition to other shorts, and feature films.

Below are some of the short films done by O'Brien.

"Prehistoric Poultry" 1916 (AKA "The Dinornis" or "The Great Roaring Whiffenpoof". A caveman gets picked on but his pet chicken seeks vengeance on the tricksters.)

"R.F.D. 10,000 B.C." 1917 (This is one of O'Brien's earlier clay figure films. Henry Saurus, the mailman, and Johnny Bearskin, the favored suitor, vie for the affections of Winnie Warclub on Valentine's Day.)

"The Ghost of Slumber Mountain" 1918 (Reportedly this was the first movie to combine live action and stop-motion together on screen. Origianlly 40 minutes long it is now only 19 minutes long. The remaining film presumably lost. It has been suggested that the reason for it being chopped was that the film was too homosexual in subtext. Barnum Brown, who is the man who discovered the T-Rex species was a technical advisor on the film. Supposedly some of the cut effects were used for "Along the Moonbeam Trail".)

"Along the Moonbeam Trail 1920" (Two children are taken on a magic plane to the moon where they find pre-historic monsters. Whether or not this film used left overs from "Ghost of Slumber Mountain" is up for debate.)