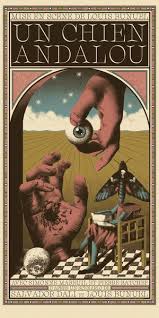 “Un Chien Andalou” AKA “An Andalusian Dog” was released in 1929 and is a collaborative effort between director Luis Bunuel and artist Salvador Dali. It is a Franco-Spanish silent surrealist short film. It is only about 16 to 20 minutes long. It was both Bunuel’s first film as well as Dali’s first film.

The film is about… who knows what. There is no plot. Hell, even the title doesn’t mean anything. It is a series of mostly unrelated scenes and in no sequence whatsoever. The title cards for the film are also in no order and make no obvious sense. They go from “once upon a time” to “eight years later”, “three in the morning”, “sixteen years ago” and the final card says “in spring”.

The first image of the film is a man, Luis Bunuel, sharpening a razor. He goes onto a balcony and sees a cloud skimming across the moon. Then the film switches to where it appears that the man is slicing open a woman’s eye with the razor. The woman is seated and doesn’t move even as he brings the razor close to her eye. The film jump cuts and It is actually a dead calf's eye that is being sliced.

It gets confusing after that. There are several strange images that are a little unnerving. A man stands looking at his hand. There is a hole in his hand and ants are coming out of it. A woman is standing in a street poking a severed hand with a stick. There is a scene where a man is pulling two baby grand pianos with dead decaying horses or donkeys on them. I’m not sure which; they’re not exactly in pristine condition but on closer look they appear to be donkeys.

There are a lot if images in the film. Most of the images are either gross or sexual. But it doesn’t linger on anything long enough to pin down any clear meaning. At least for laymen. I’m sure shrinks have a great time with it. The film means either nothing or everything. It all depends on your individual view.

As for Bunuel and Dali the film was intended to mean absolutely nothing. Which is enough for most symbolism addicted intellectuals to pull as much out of it as they could possibly think of. Supposedly it represents dream imaging. Both Bunuel and Dali’s dreams specifically. A form of Freudian free association to the sound of an accordion.

The hand with the ants coming out of it was Dali’s dream and the eyeball meets razor fiasco was Bunuel’s dream. They wrote the script in seven days. Their only rule was to refuse any image that could have a rational meaning. Easy peasy for these guys. They’re professionals. This was all when the two were first starting out and were poor. Bunuel’s mother paid for the film.

The gross images are probably why this little disjointed film is smack in the middle of the horror movie genre. Horror movies don’t have to mean anything. They just need to be gross.

It was a big hit in France, and it was better than “Eraserhead” 1977. I guess, at first blush, it’s pretty much what you get when you put two crazy people in a blender.