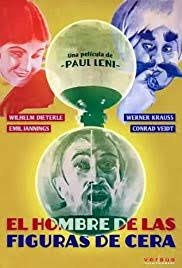 The owner of a wax museum (John Gottowt) needs to drum up some business. He places and add for a writer to create stories for some of his wax figures. A young poet (William Dieterle) applies for the position. The owner and his daughter, Eva (Olga Belajeff), explain what they are looking for. They show the poet three of the wax figures that need stories, Harun al-Rashid, Ivan the Terrible and Jack the Ripper. The proprietor mentions that one of the arms of Harun al-Rashid has broken off and has not been fixed. This inspires the writer to create a story based on how the Caliph lost his arm.

A baker named Assad (William Dieterle) is working at his ovens while his beautiful wife Maimune (Olga Belajeff) looks on. Next door the Caliph Harun al-Rashid (Emil Jannings) just lost a chess game to his vizier (Paul Biensfeldt). He blames his loss on the smoke coming from the baker’s ovens. He tells his vizier to go and kill the baker. When the vizier goes next door to cut off the baker’s head he is distracted by the beautiful wife. He goes back to the caliph without a head. The vizier tells the caliph about the beautiful wife. The vizier decides to check it out for himself. That night he sneaks out of his castle and waits for Assad to leave.

In the meantime Assad and Maimune have a fight about how poor they are. Maimune tells him a real man would find a way to bring them riches. Assad declares that he will steal the wishing ring from the Caliph to prove that he is a man and that he can provide for his wife anything she wishes. While Assad is sneaking into the castle, the caliph Harun-al-Rashid is sneaking into his house. This is where things go downhill.

Ivan the Terrible (Conrad Veidt) loves to torture and kill people. His favorite sport is to have his chemist (Ernst Legal) poison someone and write their name on an hourglass. They watch the glass knowing that when it runs out of sand their time is up and the poison will take effect. They are literally counting down the seconds when they will die. Ivan decides to kill his chemist. Knowing that his death is coming, the chemist plots his revenge. He writes the Tsar’s name on the hourglass. The next time the Tsar goes to use the hour glass he sees his name on it. Thinking he is poisoned Ivan tries to trick death but only ends up tricking himself.

After writing the first two stories the poet falls asleep. When he wakes up he finds that the wax figure of Jack the Ripper (Werner Krauss) has come to life. The ripper begins stalking both the poet and Eva. They both flee as fast as they can go but the Ripper is never far behind them.

“Waxworks” was released in 1924 and was directed by Leo Brinsky and Paul Leni. It is basically a fantasy anthology film in the portmanteau style with some German Expressionist touches.

Originally four stories were planned for the film. The fourth story was supposed to be about Rinaldo Rinaldini. He was a character created by the German writer Christian August Vulpius. Rinaldini was an adventurer, a swashbuckler and a brigand. Due to financial constraints his story was dropped from the film.

I don’t think you could really call the third story a separate story. It’s more like part of the anchor story that the other two stories grow out of. It’s much shorter, only six minutes, and uses the same characters as the opening of the anthology. The poet is still the poet and Eva is still Eva.

There are some horror aspects to the stories but there’s more horror in Grimm’s Fairy Tales than anything here. They are more fantasy tales. The first story is light with some comedy added. The second one is a little darker.

A good restoration was done on the film in 2002. The only draw-back is the tinting was a little heavy. Otherwise it’s a nice little fairytale with some German Expressionistic touches.