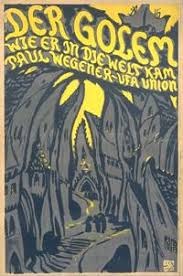 In a Jewish ghetto in Prague is Rabi Loew (Albert Steinruck). He is the head of the city’s Jewish community and a star gazer. He is also a conjurer. The Rabi becomes concerned when he reads in the stars that the Jews have adversity in their future. He informs the elders of his community. He must figure out a way to protect his community. Rabi Loew decides that he can construct a Golem (Paul Wegener) out of clay and with divine intervention, bring it to life. The Golem would then protect the Jewish people. He does his work in secret and tells his assistant (Ernst Deutsch) only when the Golem is completed.

In the meantime the Emperor (Otto Gebuhr) has decreed that the Jewish population is causing problems with the Christian Community. The Christians say that the Jews are a danger. They claim the Jews are performing black magic and must leave the city. The Emperor instructs a knight named Florian (Lothar Muthel) to deliver the decree to the ghetto.

Loew tells Florian that he does the horoscope for the Emperor and has twice saved him from disaster. He asks Florian to request an audience with the Emperor. The Emperor agrees.

Meanwhile Florian sees Loew’s daughter Miriam (Lyda Salmonova). He falls in love with her. Loew’s assistant is also in love with the beautiful Miriam; however, Miriam also loves Florian. They meet in secret whenever they can.

Loew brings the Golem to life and brings it with him to the Emperor. At first everyone at the palace is frightened of the Golem. The Emperor asks Loew to perform more feats of magic. Loew congers up a magic screen and shows the audience the history of the Jewish people. The court Jester tempts everyone to laugh at the story. When they do the palace begins to crumble and collapse on the Emperor and his court. The Golem holds up the falling ceiling and saves everyone. In gratitude the Emperor allows the Jews to remain in the city.

Rabi Loew and the Golem return to the ghetto. The Rabi believes that all is well; however, the Golem begins to have other ideas.

“The Golem: How He Came Into The World”, sometimes just referred to as “The Golem”, was released in 1920 and was directed by Carl Boese and Paul Wegener. It is a German Expressionist silent film. It is one of three Golem films made by Wegener. The other two “The Golem” 1915 and “The Golem and the Dancing Girl” 1917 are considered lost films. There may be some pieces of footage around for “The Golem” but nowhere near what represented the original film.

The film itself has gone through some restorations. Some are good and some are OK. There are a couple of versions out there. One is black and white. The music is a little uneven and the restoration is OK but there are some areas that are a little faded and dusty. Another is by Kino. This one is decently restored and is also tinted; however, it is appears to be shorter than the other so some scenes may be missing. It doesn’t appear that the movie suffers at all from it. There may be an even newer restoration available but I haven’t seen it.

The movie was an interesting and enjoyable telling of Wegener’s tale. It was full of great visuals and special effects. The sets were just abstract enough to add extra flavor to the story. The conjuring scene with Rabi Loew was a little like watching the Sorcerer’s apprentice. Paul Wegener as the Golem is also quite good. Somehow he managed to be quite expressive as a lump of clay.

In Jewish folklore a Golem is a human-looking man-made creation, usually clay or stone that has been magically brought to life. The Golem is created to help the Jewish community in some way, however, sometimes things don’t work the way they should. When a Golem goes bad, it goes very bad.