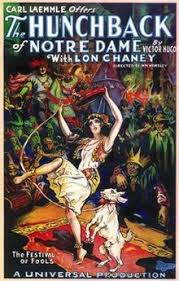 At Notre Dame Cathedral in Paris the downtrodden can find rest and sanctuary. 1482 is a hard time to be poor, deformed or a gypsy. There have always been bullies. Quasimodo (Lon Chaney) is deaf, half blind and a hunchback. He lives at the cathedral and works as the bell ringer. Don Claude (Nigel De Brulier) is the archdeacon of the church, and a good man.

His brother Jehan (Brandon Hurst), on the other hand, is greedy and lecherous. Jehan is in love with the beautiful Esmeralda (Patsy Ruth Miller). She is a gypsy and the adopted daughter of Clopin (Ernest Torrence), the king of Paris’ underworld. Jehan tells Quasimodo to kidnap Esmeralda. Esmerelda is rescued by the dashing Phoebus de Chateaupers (Norman Kerry) and Jehan leaves Quasimodo to be caught and whipped. Esmeralda takes pity on the hunchback and gives him water to drink while he is still chained to the whipping stage. Quasimodo no longer worships Jehan but now worships Esmeralda for treating him with kindness.

Phoebus falls in love with Esmeralda. He wants to marry her. Both Jehan and Clopin take issue with this. Clopin crashes into the palace to reclaim his ward but Phoebus does not want to give her up. Esmeralda loves both men for different reasons and does not want them to fight. She returns to the ghetto with Clopin and decides to become a nun. She has one last meeting with Phoebus to say good-bye. Jehan, in a fit of jealousy, stabs Phoebus and leaves Esmeralda to be blamed. She is then tortured to confess and sentenced to death.

She’s usually described as a promiscuous wanton gypsy. Perhaps she is in other films but here she seems more of a gentle pure soul who cares for people. The way she takes pity on Quasimodo’s misfortune and Gringoire’s fear when he is going to be hung shows a tenderness that is infectious. No wonder everyone adores her. Even her adoptive father Chopin has a soft spot for her and will do whatever she wants.

I got pretty pissed off at fifteenth century France. Esmeralda is accused of stabbing Phoebus and when she points to Jehan and says “He stabbed him. I saw it”, all Jehan has to say is “The girl is bewitched” and everyone just nods their heads as if to say “Oh of course. Let’s torture her.” Bull! All the men in 1482 are dogs and she gets tortured.

On a better track, Lon Chaney’s make-up is the most elaborate I’ve ever seen. He transforms his entire body into this simple minded character. His entire physical appearance, as well as his mannerisms, are focused on this creature that expresses himself in one emotion at a time. In wild abandon he is either joyous or angry or down trodden. Even though he is covered in make-up you can still see each emotion. The comparison between Quasimodo and say Erik from “Phantom” is amazing. Both characters are hideous but they react to their afflictions differently. Chaney’s acting goes far deeper than just his make-up.

The sets in the film are also amazing. They pulled out all the stops with the production values on this film. At something like one and a quarter million dollars in the budget this lavish spectacle is epic in proportions. The heart of the film, the cathedral, is spectacular.

The film itself had had a lot of releases but not a lot of restoration. Like a magic hat some better copies of the film seem to be located from time to time. The newer releases are, of course, better. The Image release in 2007 is a restoration. That and the Flicker Alley release in 2014 are the best looking ones out there, and they are quite good.