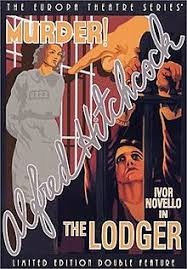 There is a serial killer in London. He has a thing for blondes. Already he has killed seven women. The papers call him “The Avenger”. He leaves a note with the body with those words written on it inside the drawing of a triangle. He always strikes on a Tuesday night.

Daisy Bunting (June Tripp) is a model. (what they use to call a mannequin.) She is at work when she hears about the latest victim. Some of the blond girls she works with have taken to wearing wigs to hide their hair. Just in case. Daisy lives with her parents, Mr. and Mrs. Bunting (Arthur Chesney and Marie Ault). Daisy’s boyfriend Joe Chandler (Malcolm Keen) is a policeman.

Times are hard and the Bunting’s need a little extra so they advertize a room to let. A young man (Ivor Novello) appears at the door looking to rent the room. The room is decorated with portraits of young blonde women. The lodger asked to have them removed. Mrs. Bunting has Daisy help her take them down. The young man stares at her all the while she is there. Daisy’s boyfriend, upon hearing that he doesn’t like pictures of beautiful women in his room concludes that the man is gay. At least for awhile.

A flirtation develops between Daisy and the Lodger. Joe starts to get concerned about a couple things. First that the Lodger is acting strange, as least to him, and he thinks the man is giving Daisy too much attention. It’s not until Joe puts the idea in Mrs. Bunting’s head that she begins to wonder who her lodger really is. She hears him go out the next Tuesday night. In the morning she finds out there was another murder. Mrs. Bunting is beginning to believe that her lodger is The Avenger. She infects her husband with her fears.

Joe, having been assigned to The Avenger case, believes that the murders have a pattern to them. He believes they have been moving toward the area where Daisy and her parents live. And where their lodger lives.

“The Lodger: A Story of the London Fog” was released in 1927 and was directed by Alfred Hitchcock. It is a British silent film. A fully tinted restoration of The Lodger was completed in 2012, as part of the British Film Institute's "Save the Hitchcock 9" project to restore all of the director's surviving silent films. It is based on the 1913 novel “The Lodger” by Marie Belloc Lowndes and the play “Who Is He?” co-written by Belloc Lowndes.

Hitchcock’s cameo happens in the newsroom in the beginning of the film. He is sitting at a desk, on the phone, with his back to the camera. The cameo happened when the person who was to play the role never showed up, so Hitch filled in. It then became a tradition for him to appear in his movies as a cameo from then on. Alma Reville also has a cameo in the film. She plays a woman listening to a wireless. Alma and Hitch married shortly before the film was released.

It seemed to me that the Lodger’s behavior got less suspicious as the movie went along rather than more suspicious. It appears that Joe’s jealousy of the handsome lodger is what triggered his belief that he was The Avenger. His poison is what infected Daisy’s parents. Joe had no proof what so ever that The Lodger had anything to do with the murders. The only things in the man’s possession are a gun, a map where the murders were committed, newspaper clippings of the murders and a picture of the first victim that the man says is his murdered sister. This last fact is something that can be checked quite easily and if it is his sister that was murdered than his obsession of the murders is also quite easily explained. Instead Joe’s jealousy makes him arrest The Lodger and put him in handcuffs. As for the gun, the movie never says how the girls are killed so my assumption would be that the gun is to kill the killer once The Lodger finds him.

The original script called for the guilt or innocence of The Lodger to be ambiguous, but when Novello was cast for the part the studio insisted on the change. Probably owing to Novello’s popularity.

The film is an interesting blend of Noir elements and German Expressionistic touches. It seems that Hitchcock was influenced by Fritz Lang and F.W. Murnau. The lights, shadows and camera angles help to create the eerie atmosphere that is present in both styles of filmmaking. Hitchcock was only 28 when he made this film. It’s a nice taste of the talent he would come to hone with experience.