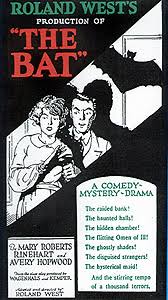 “Tush- Tush you seedy fellow. You can point that phallic symbol anywhere you want. You can even swing it around but you can’t discharge it.” (best line ever)

A master thief known only as ‘The Bat’ has been terrorizing the city. His latest victim is Gideon Bell, owner of the famous Favre emeralds. The Bat sends Bell a message saying he will steal the emeralds and neither he nor the cops can stop him. He even states the time he will do it. The millionaire and the police lay a trap for the criminal; however, they are out foxed by the mastermind. The Bat not only steals the emeralds but strangles Bell. He then leaves a note that he will head out to the countryside for a rest. The Bat moves from rooftop to rooftop and ends up on top of a bank. Looking down through the skylight he sees the bank being robbed. He follows the robber out of town.

The robber ends up at an Old Dark House in the country. The mansion had been owned by Courtleigh Fleming, an executive of the bank before he died. His nephew Richard Fleming (Arthur Housman) rented the house to Miss Cornelia Van Gorder (Emily Fitzroy) and her niece Dale Ogdon (Jewel Carmen). Also in the house are Van Gorder’s maid Lizzie (Louise Fazenda) and a butler, Billy (Sojin). The robber sneaks into the house to hide his loot. The Bat decides to hang around for awhile.

Dale sneaks her boyfriend Brooks Bailey (Jack Pickford) into the house and introduces him as the gardener. Miss Van Gorder is no fool and knows something is up but lets her niece think that she believes his story. In reality he is the bank teller that was blamed for the robbery and he is trying to find the stolen money to clear his name.

At this point a plethora of characters are introduced. Detective Moletti (Tulio Carminati) is a policeman investigating the bank robbery. Dr. Wells (Robert McKim) is the local physician but slinks around looking for the bank loot. Detective Anderson (Eddie Gribbon) is a private detective hired by Miss Cornelia who has no clue what he is doing. Richard Fleming (Arthur Housman) is the nephew of the dead bank executive who also believes the loot is in the mansion. Some guy (Lee Shumway) that staggers into the mansion all beat up. And other lurking suspicious types. And everybody wants the money.

There are some stories that, from silents to talkies, get re-made over and over again. “The Cat and the Canary”, “Donovan’s Brain”, “The Hands of Orlac”, “Dr. Jekyll and Mr. Hyde”, and “The Bat” are a few.

I like the story and I like every version that has been made for various reasons. This version of the story has a lot of noir aspects to it, but it also has a German Expressionistic flavor as well. Even though West was not German he was a director during the height of the German Expressionistic movement in film. This movie in particular had long shadow effects, a dark atmosphere and stark sets that seem just a little off. It is more a visual experience than an audio experience. Perfect for the silent film era.

There are a few versions out there. I have chosen my favorite visually, but there is no music score with it. That’s probably just as well since I wasn’t crazy about most of them.