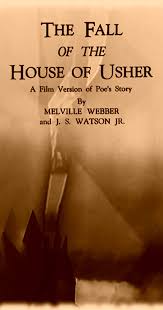 A traveler (Melville Webber) comes to the home of Roderick Usher (Herbert Stern) and his sister Madeline Usher (Hildegarde Watson). The siblings sit down at the dinner table. They are served champagne by a pair of disembodied hands wearing black gloves. The hands serve Madeline a platter with a warming cover over it. The hands remove the cover. Madeline looks at what is on the platter and faints.

Madeline then gets up and walks away as if in a daze. She falls down in front of a coffin. Apparently the grim reaper has come to the House of Usher and Madeline has been served death. She is covered in a black shroud. Hands wave in front of her face as if to determine if she is really dead. Then she is in a coffin and nails are being driven into the lid by Roderick.

Roderick, still mourning his sister, stumbles off to bed. His dreams are filled with his sister. He sleepwalks. The traveler is reading from a book. Roderick is hearing sounds. He hears his sister break out of her coffin. She comes up from the crypt and goes to Roderick. As if in an insane dance she falls on her brother bringing him to the floor. The traveler rushes from the house before it falls down.

At only 13 minutes long it is very short on plot but long on visual effects. Above all else the film is expressionistic.

If you didn’t know anything about the Poe story you would be totally lost. There is a lot of symbolism and dark images. The cinematography is creative and very abstract. There also aren’t any title cards so if you are not familiar with the story you will have to interpret it as you wish.

It is often described as German Impressionistic, but as others point out, there is more here than just that. I agree there is some German influence here but it is more of an amalgam of styles than just one. I do see the German aspects that would eventually evolve into noir but there is also a little Dali and perhaps some home grown avant garde touches.

The film was interesting but not a masterpiece in my mind. I liked it, but I much preferred the French version also done in 1928. The American version was more confusing. It was all about the symbolism and very little about the characters. Not that you could do much with character in 13 minutes. They were interchangeable with stick figures. The French version had much more character and atmosphere. The insanity was clear.

In 2000, the United States Library of Congress deemed the film "culturally, historically, or aesthetically significant film" and selected it for preservation in the National Film Registry.