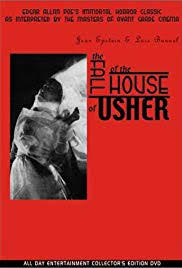 “This, where she is alive.”

Allan (Charles Lamy) stops at an inn looking for transportation to the home of a friend of his, Roderick Usher (Jean Debucourt). No one wants to give him a ride because the house is believed to be evil. He finally gets someone to bring him almost to the house.

Allan is Roderick’s only friend. Roderick lives in the mansion with his ill wife Madeleine (Marguerite Gance). The only other person to visit the home is Madeleine’s doctor (Fournez-Goffard). Madeleine suffers from an unknown illness. Roderick is obsessed with painting a portrait of his wife. Madeleine is his muse. With every stroke of his brush it is as if her life was being transferred to the portrait.

When Madeleine suddenly dies Roderick is so obsessed with finishing his painting that he doesn’t notice her dead on the floor. Roderick is unable to accept her death. She is put into the family crypt. In his insanity he believes that he can bring his wife back to life.

“The Fall of the House of Usher” AKA “La Chute de la Maison Usher” was released in 1928 and was directed by Jean Epstein. It is a French silent movie. It is supposedly based on Edgar Allan Poe’s story “The Fall of the House of Usher” written in 1839. It is one of two movies made in 1928 with the same title. This one is about 63 minutes long the other was only about 12 or 13 minutes in length. The other was an American film. Which one was released first is up for grabs.

I question whether or not you could really call this the Poe story since so much of it is changed. Lots of liberties were taken; Madeleine is Roderick’s wife and not his sister. The visitor is an old friend of Roderick now the fiancé of Madeleine. Roderick is consumed with painting his wife’s portrait. It seems to have just as much in common with “The Picture of Dorian Gray” only in reverse.

There are some strange images in the film. During the burial there’s weird stock footage of a couple frogs having sex and the back of what looks like an owl. I have no idea what they symbolize. Outside of that the special effects were quite striking. It was actually a captivating movie.

If you want to know what insanity looks like, this is a decent view. If you can ignore that fact that this is supposed to be a Poe story you will find the film to be very intense and eerie. Don’t look at it as based on Poe, more like inspired by him. Although it does pretty well capture Poe’s type of madness extraordinarily well. The movie is really good and very haunting.

There has been a restoration done, with tinting. The title cards are in French with I think Italian subtitles. There is also an OK version with French title cards and English subtitles, but it is not quite as impressive as the tinted version. I’ve included them both.