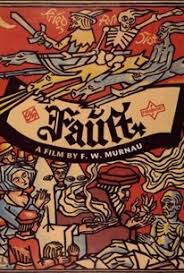 An archangel (Werner Fuetterer) and Mephistopheles, or Mephisto (Emil Jannings), have a wager. The demon says he can corrupt a righteous man and take his soul. The toy they decide to play with is Faust (Gosta Ekman). He is an old man and an alchemist. The demon spreads a plague on the city where Faust lives.

When Faust becomes disillusioned with prayer not helping to heal the sick he burns his books. When he goes to burn his bible it opens to a page that promises power and glory if he makes a pact with the devil. Following the instructions in the book he conjures up the demon.

Mephisto appears and talks Faust into a 24 hour trial. Faust begins to cure the sick but when he cannot face the cross of Christ the town knows he is in league with the devil and they stone him. Mephisto is not one to give up so easily and so he promises Faust youth, a beautiful woman and all Earthly pleasures.

While Faust is enjoying his new life the sands run out of his 24 trial period. Now hooked Faust pledges his soul. Faust has whole heartedly gone over to the dark side. When Faust gets sick of all the decadence he has Mephisto take him back home.

Due to the demon’s prodding Faust goes to Gretchen's room. While they are in bed the demon orchestrates a series of events. He wakes Gretchen’s mother (Frida Richard) up and she sees them in bed. She has a heart attack and dies. He then goes and tells Gretchen’s brother Valentin (William Dieterle) that Gretchen is no longer pure and the reason is Faust. Valentin rushes home and challenges Faust to a duel with swords. Mephisto kills Valentin and tells Faust that he was the murderer. He tells Faust to flee and then runs around town shouting Murderer. Faust and Mephisto fly away on a black demon horse.

Before he dies Valentin curses Faust and Gretchen. Gretchen has now lost her lover, her mother and her brother. She has been condemned as a harlot and is put into the stocks. Everything that has happened to her is the fault of Faust and Mephisto’s conniving. But Mephisto is not done yet with Gretchen. Not by a long shot.

“Faust” was released in 1926 and was directed by F. W. Murnau. It is the last film he made before moving to America. The movie is based on a German folktale that dates back to the sixteenth century. It is a silent film. The film is over an hour and fifty minutes long but it doesn’t seem like it. It’s fast paced and engaging. The story and the images are constant. It is a German Expressionistic jewel. Five versions of the film were made for different markets in various lengths.

The film is visually stunning with some very interesting imagery. My favorite is the visual of plague as huge black wings stretching from Mephisto over the city. The demon is death and death has wings. It is just as captivating as “Nosferatu” 1922. The film inspired Walt Disney’s “Night on Bald Mountain” sequence in “Fantasia”.

My issue with “Faust”, and stories like it, is that Faust doesn’t suffer for selling his soul to the devil. Gretchen does. Someone who was pure until Faust and his debauchery took advantage of her naivety and turned it into a weapon. The wager, which I also had an issue with, was to corrupt Faust. In doing so, it is not Faust that suffers for his human failings and free will; it is Gretchen and her family.