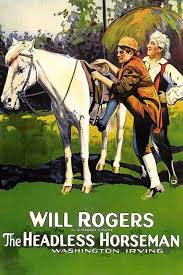 “Behold in yon weather-cock, the windy image of your pedagogue!”

In 1790 the area of New York State known as Sleepy Hollow hires a new school master. It is late summer when he arrives. Ichabod Crane (Will Rogers) comes from New York City. Crane is a learned man who knows much about New England folklore. He knows all the ghost tales and has heard of the Legend of the Headless Horseman. The horseman is the spirit of a Hessian soldier that had been decapitated. The horseman is said to ride from the graveyard each night in search of his head.

The belle of Sleepy Hollow is Katrina Van Tassel (Lois Meredith). She is the daughter of the area’s richest farmer (Bernard A. Reinold). Abraham Van Brunt ‘Brom Bones’ (Ben Hendricks Jr.) is her most ardent suitor, at least until Crane shows up. Brom, being the jealous type does whatever he can to make the school teacher look bad to the town’s residents.

When Ichabod punishes the innkeeper's son Jethro Martling (James Sheridan) his mother (Mary Foy) is upset. Brom sees an opening to stir discontent. He plays several pranks on the school teacher that make it appear that he is in league with the devil. He then pays Adrian Van Ripper (Jerry Devine) to pretend that he has been bewitched. Many fine upstanding members of the community are preparing to tar and feather the hapless Crane when it is discovered that it was all a plot by Brom to get rid of the school master.

Now that Ichabod is once again the toast of the hamlet he attends a quilting party at the Van Tassel residence. At the party Ichabod hears stories from the locals of their encounters with the demon horsemen. Each one is more outlandish than the last. Finally at the end of the night, after everyone else has gone home, Ichabod decides to propose to Katrina. Things pretty much go downhill for Crane after that.

“The Headless Horseman” was released in 1922 and was directed by Edward D. Venturini. The movie is a silent film based on the Washington Irving story “The Legend of Sleepy Hollow”.

I couldn’t find a lot of people who liked this version of the story. That may be why it never had a proper restoration. I can understand the less than enthusiastic response to the film since the star of the show, the headless horseman, is referred to a few times but doesn’t make an appearance until the last few minutes of the film.

The rest of the film is about Crane and his mooning over the fickle Katrina and about Brom being a dick-head. Of course I can’t blame Brom too much since Katrina’s prick teasing and Crane’s superior attitude are just as insufferable and annoying. Other than the tar and feathering possibility and the last three or four minutes there isn’t a whole lot that is interesting about the film. At one point; however, you do get to see a cock fight.

The best copy of the movie I could find has a music score created by Kevin MacLeod. The movie is in the public domain and the rights to the music are free, however, they ask if anyone would like to consider a small donation to Kevin MacLeod at his website - www.incompetech.com. I include it in case you do.

The film’s claim to fame is that it is the first feature photographed on panchromatic negative film stock. Apparently it is equally sensitive to all colors of the spectrum, unlike the earlier orthochromatic film. As such it did not render blue skies and blue eyes pale white. I’m not sure why that’s a big deal since the film is in black and white. Since it is the film’s main historical feature, I thus include it.