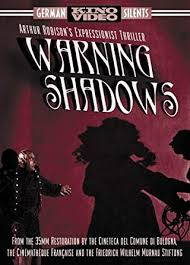 A man (Fritz Kortner) and his wife (Ruth Weyher) are having a small dinner party. Four people have been invited. A young man (Gustav von Wangenhein) who is the wife’s lover and three other men who drool after the wife, (Eugen Rex), (Max Gulstorff) and (Ferdinand von Alten). Also on hand are two male servants (Fritz Rasp) and (Carl Platen) and a maid (Lilli Herder).

The man is very jealous of the attention his wife gets from the other men. The wife flirts with the men and they in turn flirt with her when they think the husband isn’t looking. The man is enraged at what is going on in his own house and under his nose.

A street entertainer (Alexander Granach) knocks on the door looking for work. He has seen the dinner guests enter the house and is hoping to get a job entertaining them. He is a puppeteer and does a shadow puppet show. The man hires him and the puppeteer performs his act for the guests.

As the evening progresses the men drool some more, the wife eats it up and the husband fumes. When the wife and her lover sneak off to be together the husband follows and sees them kissing in the reflection of a mirror.

Now over the top the man has his servants tie up his wife and presents his dinner guests with swords. Whatever is to happen next, it appears there will be bloodshed. It seems that the party is over. But then, things aren’t exactly what they seem.

“Warning Shadows-A Nocturnal Hallucination” AKA “Schatten-Eine nachtliche Halluzination” was released in 1923 and was directed by Arthur Robison. It is a German silent film. One of the things that make this film a little different is that there are no title cards. We are introduced to the players at the beginning of the film. After that we are left to interpret what we are seeing in our own way.

Many of the actions and images are obvious but there is also an alternate reality to the film that is not quite so well defined. The shadow puppet effect tells us that what we are seeing may not be totally real. Is what is happening actually real or is it in the mind of the husband or are things a little of both?

Without the title cards our imagination is freer to interpret the events of the film as we wish and the film can be interpreted many ways. Was it a dream or was it something else? Basically the film means whatever you want it to mean. The rest of the film is just as visually fascinating, but I find German Expressionistic films fascinating anyway.

One other point, at least to me, concerns the actions of the actors themselves. They appear overly dramatic and, to put it bluntly, silent filmy. Over the top motions and reactions that silent films have been caricatured for decades. Some people blame the director for this. Perhaps so, but I’m not totally convinced that the reason for it is a fault about the film. I look at the human reactions and gestures as part of the unreality. As I stated before the people are not the actors, the shadows are. The people should be reflected as not real because they aren’t.

As for the film not being linear and easy to follow, since when has a dream made sense?