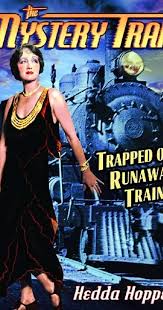 Mrs. Marian Radcliffe (Hedda Hopper) is broke. She lost all her money in the stock market crash of 1929. Her attorney William Mortimer (Bryant Washburn) tells her that it’s too bad she doesn’t have a daughter. He says he is probating an inheritance for a young man named Ronald Stanhope (Nick Stuart). He says the man is coming into a lot of money but there is one asset that is supposed to go to his wife when he marries. The item is a valuable necklace. He jokingly says, if she had a daughter she could marry her off to Ronald and she would get the necklace.

Also on the train is a sheriff (Joseph W. Girard) and his prisoner Joan Lane (Marceline Day). Joan insists she is innocent. Not long after the train leaves the station it crashes. The sheriff is injured. Joan takes the keys and unlocks the handcuffs. Marian and Mortimer are aware that Joan is a fugitive. Marian shelters the girl saying that she is her niece Joan. Marian takes the girl to her home and presents her as her niece that had been away at boarding school. Ronnie and Joan meet and fall in love. Joan knows she is a fugitive and refuses to marry Ronnie. Ronnie is beside himself. Marian and Mortimer keep pushing them together. Ronnie is OK with that but Joan is feeling guilty. Marian tells Joan that she is broke and that she is depending on the diamond necklace Joan would inherit when she married Ronnie. Joan still refuses. Marion threatens to have her sent to prison if she doesn’t marry Ronnie. Now Joan knows why Marion covered for her and has been good to her. She knows that Marion just wanted to use her to get to Ronnie’s money. “The Mystery Train” was released in 1931 and was directed by Phil Whitman. This little known movie is a low-budget poverty row film. It’s labeled as a crime mystery drama but there really isn’t any mystery here. You pretty much know what’s what from the first reel. There is, however, a little bit of a twist to it further on. Nothing mysterious just a bit of a plot change that adds to the film. What the film is mostly is a love story. In the middle of this love story are two train crashes, one runaway train, a diamond theft, a hold-up and a sissy looking fist fight. Not bad for barely over an hour. The film itself is not bad. Quite a bit goes on for such a short film. To many, Hedda Hopper playing an extortionist is basically type casting. After her acting career essentially fizzled she wrote a scandal column. She ruined the careers of many stars and was not above blackmail. She also was responsible for many people being blacklisted. She was vindictive and cruel. One line in her column could make or break an actor’s career. Reportedly Joan Bennett sent her a skunk one Valentine’s Day. In turn, Hedda named the skunk Joan and auctioned it off to the highest bidder. Hedda Hopper, is also the mother of William Hopper, who played Paul Drake in the Perry Mason television series.