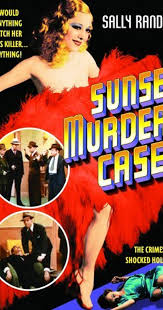 Sergeant Tom O’Connor (Frank O’Connor) and Special Prosecutor Oliver Helton (Reed Hadley) are questioning Nita Madera. She has been arrested as part of an insurance scam concerning phony car accidents. She gets bailed out by mobster Bapti Stephani (Paul Sutton). O’Connor’s daughter Kathy (Sally Rand) is dating a reporter, Lou Fleming (Dennis Moore). Kathy is a dancer at a local club. Lou is at the club when O’Connor and Helton come in. O’Connor mentions that he is going over to Nita’s apartment to have a talk with her, hoping to get some information.

In the meantime Bapti sends a couple of his goons to Nita’s apartment to kill her. Before they can leave someone rings the door buzzer. The goons hide. O’Connor comes into the apartment and is shot by one of the goons. They rush out just before Lou shows up. Lou phones in his scoop and then calls the cops. Oliver tells Kathy about her father’s death. When Lou gets there Kathy decides she is going to find out whom killer her father. She wants Lou to help. She tells him to plant a story in his paper about a famous dancer who has just returned from England. Kathy begins working at Bapti’s nightclub using the alias Valerie. Bapti stages another accident. Kathy, now Valerie thinks that this may be her in to find out what happened to her father. She tells Bapti that she needs money. He wants to use her in another phony accident scam. Meanwhile Lou has been pretending to date Penny Nichols (Kathryn Kane), a singer at the club. She thinks he is on the phone trying to get a marriage license when he is actually talking to his editor about the latest scam. Penny hears him. She tells Bapti, not knowing she has really spilled the beans. Now Bapti knows he is being set up. “Sunset Murder Case” was released in 1938 and was directed by Louis J. Gasnier. It is based on a story that was featured in Liberty Magazine called “Sunset Strip Case” by Harold Joyce. It is a poverty row “B” film. Much ado revolves around this little film that is so short it has to stretch to fill an hour’s time. Although the movie was released in 1938 it was banned in so many places it was re-released in 1941. Sally Rand was a burlesque star known for her famous “fan dance”. She appeared in several movies, most of them prior to when the Production Code went into effect. She only appeared in two movies after the Code began, this one and a western called “The Big Show” 1936 with Audie Murphy. Since Sally was in “Sunset Murder Case” the censors were especially cognizant of the content of the film. But it didn’t stop there. The original name of the film was changed from “Sunset Strip Case” to “Sunset Murder Case” even though the Sunset Strip referred to in the title was the name of the street and not the double entendre that the censors were thinking. Regardless of the name change the film was still banned and many lawsuits were filed from proper review boards who objected to the film. It was banned in Boston, but apparently everything was banned in Boston at one time or another. The reason for most of the hoopla is Sally’s dance number. Actually she does two dances. One with a giant balloon and one with a giant ostrich feather fan. In both she is either in shadow or at such a distance that you only get the suggestion that she is naked. Still it was enough. I suppose on a big screen it had more affect. All of the controversy caused the studio “Grand National Pictures” to go out of business. Eventually they did come back though but as Producers Releasing Corporation. The film itself is average at best. The acting is so-so and the plot is typical. There is also no real mystery to the film. It’s your basic crime drama with striptease on the side. The surprise is that it was made at all in the post-Code era. Rand supposedly had a lisp but it’s not evident in the film.