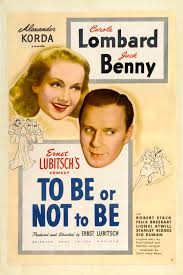 Joseph and Maria Tura (Jack Benny and Carole Lombard) are stage actors in Warsaw, Poland. Maria begins a brief affair with a young pilot, Lt. Stanislav Sobinski (Robert Stack). Sobinski professes his love for Maria and expects her to leave her husband and be with him. Before Maria can explain to the love sick Lieutenant that he was just a fling, Hitler invades Poland. Since Sobinski is a pilot he rushes off to join his unit while Poland is being bombed.

Hitler invades Poland, but the Polish resistance is in full force defending the country. Sobinski is with the Polish division of the British Royal Air Force. One evening they are entertaining Professor Siletsky (Stanley Ridges). He is the leader of the Polish resistance. He lets slip to the pilots that he has to go to Warsaw on a secret mission. The men ask him to deliver messages to their loved ones who are still stuck in Poland. Sobinski asks him to deliver a message to Maria Tura. He becomes suspicious when Siletsky, who is supposedly from Warsaw, doesn’t know the name of the famous stage actress. Sobinski tells his superiors. They in turn are worried since Siletsky know knows the names of relatives of the Polish fighters and can use that information to compromise the RAF airmen’s relatives. They fly Sobinski back to warn Maria and the underground. Maria gets word to the underground but is stopped before she can return home. She is brought to Siletsky. Siletsky is intrigued with Maria and wants to recruit her as a spy. Among other things. While Maria is trying to extract herself from Siletsky, Joseph returns home to find Sobinski in his bed. Before Joseph can express his righteous indignation Maria returns with the news that Siletsky is in Warsaw. Maria, Joseph and the acting troupe devise a plan to get the incriminating files from Siletsky. Joseph pretends to be Siletsky’s contact, Colonel Ehrhardt (Sig Ruman), but his jealousy over Maria ends up giving him away. When Siletsky tries to escape he is killed. Before Siletsky was killed he had mentioned that there is another copy of the documentation at his hotel. Joseph then disguises himself as Siletsky and goes to the hotel where Maria is still waiting. Before Joseph gets to the hotel the real Colonel Ehrhardt’s adjutant Captain Schultz (Henry Victor) is waiting. Joseph must continue playing Siletsky until Siletsky’s body is found. Not knowing Siletsky was found Joseph returns to Ehrhardt’s office. Things get a little tricky from there. “To Be or Not To Be” was released in 1942 and was directed by Ernst Lubitsch. The movie is a satire about the Nazi invasion of Poland. A risky proposition since the United States was still in the middle of WWII at the time. If America had lost the war there would have been severe repercussions for many of those involved in it. Although the movie is a satire it is also quite intriguing as an espionage film. There are sections with outright humor and subtle humor and then there are parts that are as involved as any spy novel. Lubitsch brilliantly combines comedy with the insane idiocy of mindless Nazi lemmings. The Nazi’s are buffoons, but dangerous ones. Jack Benny was insecure about being the central star of the film. He was shocked that not only did Lubitsch want him to star but that he built the role around him. Reportedly Lubitsch handled the situation by saying: "You think you are a comedian. You are not even a clown. You are fooling the public for 30 years. You are fooling even yourself. A clown - he is a performer what is doing funny things. A comedian - he is a performer what is saying funny things. But you, Jack, you are an actor; you are an actor playing the part of a comedian and this you are doing very well. But do not worry; I keep your secret to myself." The film was excellent. Fast paced and full of wonderful dialogue from great actors. It doesn’t trivialize the Nazi’s but it does mock them splendidly. I highly recommend it. The movie was re-made in 1983 by Mel Brooks.