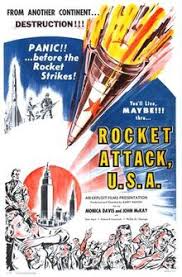 The cold war is raging on. The United States and the Soviet Union are the main contenders. When the Soviet Union sends up a satellite the United States is put on notice. Their worry is that the Soviets are using the satellite to get information on US intelligence. To find out, for sure, what is going on the US sends an undercover agent into Russia. His name is John Manston (John McKay). His contact is a Russian named Tanya (Monica Davis). Their mission is to find out how far along the Russians are to creating an Inter-Continental Ballistic Missile, an ICBM.

Tanya sleeps with lots of Russians to find out what she can while John hides in the closet. One of Tanya’s gentlemen friends reveals that the Soviets are very close to launching their missile at an American city. He even invites Tanya to go look at the rocket. Tanya sends word back through a British agent to meet her at the launch site. The Soviets intend on launching the missile and have targeted an American city. John knows that he must destroy the rocket or millions of people will die. “Rocket Attack U.S.A.” AKA “Five Minutes to Zero” was released in 1961 and was directed by Barry Mahon. It is pure propaganda and pure exploitation. And the movie sucks. It’s an hour and four minutes of drudgery. Bad acting, bad dialogue, bad sound, bad camera work, bad everything. There was some cute little space rocket animation and some lovely stock footage of random stuff. Otherwise it’s dull as dirt. The only good tip I got out of the movie is that, in case of nuclear annihilation, cover yourself in wet newspaper. As for director Barry Mahon, the only thing he is known for, if at all, is a bunch of “Nudie-Cutie” movies he did throughout his career. In October 1957, during the Cold War, the Russians launched the Sputnik Rocket into space. It was an unmanned carrier vehicle used to place the Sputnik I satellite into orbit around Earth. This made the Soviet Union the first country to put a manmade object into space. The effect of this threw the United States into high gear. Not successfully though. By the time the US got its act together Russia had launched another satellite, Sputnik II into orbit in November 1957. The USA Explorer Satellite was successfully launched in January 1958. It wasn’t until later that year that NASA was established. What America feared during Sputnik’s travels was that it might be able to pick up information that the Soviet Union could use against us. What it did do was not much of anything. Sputnik was a radio transmitter. It beeped. Still the Soviet Union did get bragging rights. For awhile Russia’s dick was bigger than the United States’ dick. The Russian word "Sputnik" means "companion" ("satellite" in the astronomical sense). I remember as a kid my parents had a turquoise pom pom clock in the kitchen. It was shaped like spokes on a wheel. They were usually referred to as atomic mid century clocks. We had it for years. The clock’s nick name was sputnik. I miss that clock.