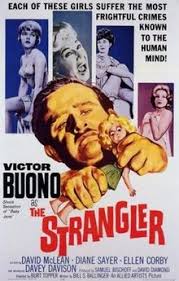 Leo Kroll (Victor Buono) is a lab technician at a hospital. He is around thirty, fat, rather uninteresting looking and a psychopathic serial killer. You can blame this mother for that. Mrs. Kroll (Ellen Corby) is an over-bearing, over-protective, nag of a mother who criticizes everything her son does and demands Leo’s full attention. She has managed to warp his personality into one that sees all women in the same light as he sees his mother.

The feelings of hatred he feels towards his mother he transfers to other women. He wants to kill his mother. Instead he kills other women. His method of choice is a woman’s stocking wrapped around the neck. He chokes his victims until they are dead thereby releasing his sexual tension. So far he’s killed eight women. The police are no closer to finding the killer. The latest victim is Helen Lawson (Selette Cole). She was found by her fiancée Jack Rosten (Robert Cranford). She was a nurse that worked at a hospital. All of his victims have been nurses. As part of their investigation they question all male hospital personnel anywhere she worked. One of those questioned is Leo Kroll. Leo answers their questions. Leo visits his mother. She is in a nursing home but still hounds Leo to visit her every day. He missed two days in a row. His mother tells him she was so upset that she had a heart attack and almost died. If it wasn’t for her nurse Clara (Jeanne Bates) she would have. Leo is angry at Clara for saving his mother’s life. He goes to her home and strangles her with his bare hands. In the process a doll falls of a shelf and begins whining Ma ma, Ma ma. The sound of the Ma-Ma doll breaks his concentration and he throws the doll against the wall in anger. This is his first mistake. The killing of Clara Thomas is different than the others. It’s personal. Kroll is once again questioned. They even give him a lie detector test. Being a psychopath, he passes it with flying colors. They have no choice but to release him. Knowing his mother’s fragile state he tells her Clara is dead. She has another heart attack and dies. Kroll is now released from his tormenter. He believes he can lead a normal life. That is his second mistake. “The Strangler” was released in 1964 and was directed by Burt Topper. It is a crime/thriller and was inspired by the news reports concerning The Boston Strangler, who was terrorizing the Boston area during that time. The movie was released three months after the Boston Strangler claimed his last victim. Some people found the pacing of the film a little slow. I didn’t see it that way. Some also just dismissed it as a Boston Strangler rip-off. Exploitative? Yes, absolutely. Still the performance of Victor Buono as the strangler was outstanding. He had recently received a nomination for an Academy Award for his performance as Edwin Flagg in “Whatever Happened To Baby Jane?” 1962. In my opinion he should have gotten one here as well. It is also Buono’s influence that made the film a little less exploitative than it actually would have been had he not put up a fuss concerning parts of the film that were intended to be even more suggestive than they were. I credit Buono’s acting ability to show that audience what a psychopathic serial killer really looks like. There is also an additional alternate version available of part of the beginning sequence to the film.