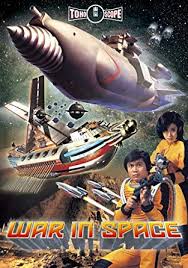 In 1988 Earth is still trying to recover from an electromagnetic wave that hit the planet when a comet passed close by. While trying to contact Space Station Terra a communication from the station warns of a UFO sighting. They report that it looks like a Roman Galleon. In conjunction with the attack on the space station, reports come in of meteorites hitting the Earth. Professor Schmidt from the UN goes to the mountains to investigate. He is reported dead.

Shortly after that he appears at the home of Professor Takigawa. Schmidt says he was being followed and as a precaution was reported dead to outwit any spies. Schmidt asks Takigawa to finish completion on a space ship he had been building called Gohten. Takigawa had stopped work on the project several years prior. Takigawa is suspicious of Schmidt and figures out that he is an imposter. In reality Schmidt is an alien from Venus looking to get a hold of the plans for Gohten. The alien is chased but blows himself up to avoid capture. Now that the aliens have made an overt attempt to steal the plans, Takigawa is ordered to complete the space ship and is put under UN commander Oshi. Oshi is in charge of Japans defense forces. While Takigawa hurries to complete Gohten the aliens begin their attack on Earth. Gohten is completed but aliens infiltrate the secret base and try to take over the ship. They are defeated and Gohten is launched. Gohten easily wipes out the enemy space ships near Earth and heads for Venus. On the way they run into the demolished space station. Inside is the body of Tadashi Mikasa. They bring it back to the ship. Mikasa turns out to be an alien in disguise. He kidnaps Professor Takigawa’s daughter June. The ship Gohten receives a message from the alien ship. The head of the alien race is Helt, the Supreme Commander of the Empire of Galaxies. He tells them he is from the planet Yomi. They come from a world with a dying sun. They are looking for a new planet and Earth looks good to them. They want Takigawa to surrender or they will kill his daughter. When the Gohten gets to Venus three men, Miyoshi, Muroi and Jimmy use a shuttlecraft to explore the planet looking for the aliens. They find the Galleon ship in a cave. Looking for flaws in the alien ship’s defenses, they take pictures to study later. They are attacked but make it back to Gohten with their pictures. What they need now is a plan to save June and dispose of the alien threat once and for all. “The War In Space” AKA “Great Planet War” was released in 1977 and was directed by Jun Fukuda. It is a science fiction movie by TOHO studios. It is supposed to be a sort of sequel to “Battle In Outer Space” 1959. The space ship Gohten is very reminiscent to the submarine in “Atragon” 1963. Japanese science fiction movies are sometimes peppered with Kaiju. In this one the monster is a Spacebeast. It looks like a shorter version of a black wookiee with horns. It’s cute. The film makes use of stock footage from “Battle in Outer Space”, “The Last War” 1961, “Ebirah, Horror of the Deep” 1966, “Submersion of Japan” 1973, and “Prophecies of Nostradamus” 1974. I’m afraid “The War In Space” is not as interesting as “Battle In Outer Space”. The movie starts out slow and doesn’t pickup at all from there. It’s a Japanese space opera loaded with sappy moments. The characters aren’t very interesting and the dialogue is average at best. There were a few cool things like the revolver cylinder that can dispense either spacecraft or revolver beams. The wookiee thing. Oh, and blowing up Venus. Despite all these things it wasn’t enough to improve my view of the film. It was OK, it just didn’t have the fast pace that an alien battle in outer space movie should have. American dubbed Japanese subtitled