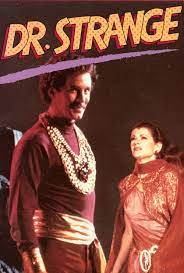 An ancient demon called the Nameless One (David Hooks) sends his minion, Morgan LeFay (Jessica Walter) to Earth to destroy the powerful Sorcerer Supreme, Thomas Lindmer (John Mills).  The demon gives her three days to accomplish her task.  Morgan uses a young innocent, Clea Lake (Anne-Marie Martin) as a vessel.  Controlling her mind, she has Clea throw Lindmer off a pedestrian bridge and into traffic.  Clea is traumatically affected by the experience and goes into a fugue state.  She is taken to the hospital where she meets Dr. Stephen Strange (Peter Hooten), a psychiatrist at the hospital.

Linder does not die in the fall from the bridge.  Linder is aware of Dr. Strange’s existence.  He believes that Strange is to be his successor in keeping the evils of the universe at bay.  Linder’s pupil, Wong (Clyde Kusatsu) has been keeping an eye on Strange.  Wong also learns that Clea was used as an instrument in Morgan’s plan to destroy him and that she is now at the hospital under Strange’s care.  Linder goes to the hospital to talk to Strange.

Strange has been experiencing bizarre visions where he sees Clea attack Lindmer.  Lindmer tells Strange that there is a psychic bond between him and Clea and that she needs more than medical help.  Strange dismisses Lindmer’s claims.  When the chief of psychiatry, Dr. Frank Taylor (Philip Sterling) screws up Clea’s medication and sends her into a coma, Strange decides to talk to Lindmer.

Lindmer tells Strange that he has the potential to succeed him.  Strange is still hesitant but he wants to help Clea.  Lindmer sends Strange to the astral plane where he confronts a demon called Balzaroth (Ted Cassidy).  Defeating the demon, he brings Clea back to the physical world.  Strange is now ready to call it quits but Morgan is not done with him or Lindmer.  When Lindmer is attacked Strange has no choice but to return to the astral plane and do battle with Morgan.

“Dr. Strange” was released in 1978 and was directed by Philip Deguere Jr.  It is a superhero movie and an unsold television pilot.  The pilot was written by Deguere, Steve Ditko and Stan Lee.  Since this is a made for television pilot, the special effects are not exactly earth shattering.  The budget was decent, but CGI wasn’t what it is now.

Despite the fact that Lee was an advisor on the film, there are some differences between this Dr. Strange character and the original.  This Dr. Strange is not nearly as arrogant and is far more altruistic.  He is also a physiatrist and not a surgeon.  There is no need for a car accident that ruins his career; he just has to accept what the universe has in store for him.  Lee actually liked the film and was disappointed when it didn’t do well.  The movie did get a bit of a following, especially since it was the first live action adaptation of the character.  A restored Blu-ray limited release was done in 2022.

Peter Hooten would not have been my choice for Dr. Strange.  I just never pictured Stephen Strange as a John Holmes look-a-like.  Hooten is no Benedict Cumberbatch, but Cumberbatch was only two years old when the film was made.  A character called the Ancient One, which is just a glowing light, is voiced by Michael Ansara.