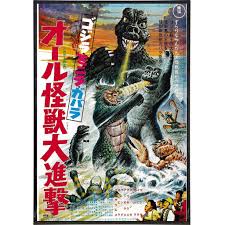 Ichiro Miki is a boy who is by himself a lot. Older boys pick on him, especially a bigger boy named Gabara. Add to that his parents are always away at work. He has few friends, only a girl named Sachiko and an old toy maker that lives in his building called Shinpei Inami. Ichiro has nothing to keep him company except his imagination. He loves monsters and longs to visit Monster Island. In his imagination he takes an airplane to the island.

Once on Monster Island he finds himself in a jungle. Up ahead he can see Godzilla fighting with Kamacuras. He climbs a tree and sees Gorosaurus, Manda, Anguirus and overhead a giant eagle. The eagle attacks Godzilla but Godzilla basically fries the bird. Ichiro wanders through the jungle until he sees Kamacuras. When the giant praying mantis chases him he falls into a deep pit. The pit is too deep to climb out of but a long vine is sent down to help him up. At the top of the pit is Minilla. Minilla talks. The two sit and talk for a while until a nasty monster named Gabara appears. Ichiro realizes that he and Minilla have a lot in common. They are both picked on by a bully named Gabara. Ichiro is woken up from his sleep by Shinpei telling him his mother will be home very late. Ichiro goes outside to pass the time. Outside he sees the bullies and runs away. He starts exploring an old abandoned building. Inside the building he finds someone’s lost driver’s license. The license belongs to a bank robber that is in the area. The robber follows Ichiro home to find out where he lives. After having dinner with Shinpei, Ichiro’s imagination takes him once again to Monster Island. Ichiro is chased by the Gabara monster but gets away. He finds Minilla. The two of them commiserate about being cowards while Godzilla beats up every monster he’s ever encountered before, and then some. Ichiro’s dream is interrupted by the bank robbers. They kidnap him and take him to the abandoned building. Ichiro escapes into his dream world where Minilla is being harassed by Gabara. Minilla eventually fights back and chases the bully away. Ichiro is woken up from his dream again by the bank robbers. They tie him up and take him with them as a hostage. Ichiro realizes that there are bigger bullies in the world than just a Gabara monster. “All Monsters Attack” AKA “Godzilla’s Revenge” in the U.S. was released in 1969 and was directed by Ishiro Honda. It is the tenth film in the Godzilla series and the Showa period. This is one of those movies that you either hate or love. Most people and most critics hated it. Including me, but I’m not a six year old child. The movie wasn’t made for me. The movie was purposely made for children and was designed to be released during the Christmas season. This is also one of the Godzilla movies that suffered from a less than ample budget. Pretty much most of the monster sequences are stock footage from previous Godzilla films. The only new monster footage is anything with Gabara, anything with Minilla and Ichiro together and some of the exchanges between Minilla and Godzilla. Ishiro Honda has directed eleven Godzilla films, including the first one. He has stated that “All Monsters Attack” was one of his favorites. Honda is famous for interjecting a moral or a message into his Godzilla films. Usually it’s themes like the evils of atomic weapons, or war in general. Even pollution was a subject of at least one film. In “All Monsters Attack” the theme is anti-bullying. Something that a child would most likely come in contact with in everyday life. Here it’s not just Ichiro that has to deal with it, but Minilla as well. American dubbed Japanese subtitled