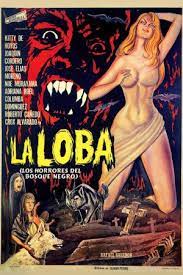 A she-werewolf is terrorizing the countryside.  After slaying a few people, the she-wolf is interrupted and races back to a crypt.  The crypt leads to a room in the Fernandez estate.  Professor Fernandez (Jose Elias Moreno) and his wife Marcela (Columba Dominguez) live at the estate with their two daughters, Clarisa (Kitty de Hoyos) and Alicia (Adriana Roel).  Also living at the estate is Crumba (Crox Alvarado).  Professor Fernandez saved Crumba’s life in the past and now the man is devoted to the Professor.

The She-Wolf is the Fernandez daughter, Clarisa.  Professor Fernandez is researching metaplasia, the abnormal changes in tissue in the body.  He has been researching it in plants and animals.  Using cryogenics as a tool, he has been able to cure some types of tissue changes in some of his experiments, but he is a long way from being able to fix his daughter.

Alejandro returns to the Fernandez compound and tells Crumba that he was bitten by a werewolf when he was actually bitten by Jack the dog.  What he doesn’t say is that he has been a werewolf all this time.  The Professor operates on him, but he is close to death.  He decides that he must cryogenically freeze Alejandro until he can recover.  When Alejandro is inadvertently thawed, he attacks and kills Alejandro's wife, Marcela.  Since the werewolf killer and Jack, the dog, were in jail when Marcela was killed, they are set free.

Roaming the countryside are two werewolves, a werewolf killer and his werewolf killing dog and a whole bunch of people who end up in between them.

“La Loba” AKA “The She-Wolf” was released in 1965 and was directed by Rafael Baledon.  It is a Mexican horror movie and Mexico’s first attempt at a werewolf style story.  The subject matter is taken seriously.  There is no intentional camp added to the movie.

Although the makeup effects are not great, they are interesting.  The “She-Wolf”, at times, looks almost like someone wearing a ghillie suit and at others a naked woman with long strands of hair covering her.  She also sports a tail which was a nice touch.  The transformation sequences are short and nondescript, but the chase and fight sequences are impressive, especially considering the budget constraints.

There are a lot of deaths; very few people are left alive at the end of the film.  I consider the story Romeo and Juliet, werewolf style.  In the Mexican version of werewolf lore, a werewolf can only be killed by an ivory knife or a specially trained werewolf killing dog.  The plot may sound a little farfetched, but it is told matter-of-factly in the traditional horror story format.  It is a different take on the standard werewolf tale and quite refreshing, not to mention one of only a few early films that is devoted to a female werewolf.  It is a good movie if you are a fan of Mexican horror or the horror genre in general.