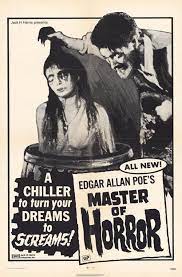 While her employers are out for the evening the maid (Mercedes Carreras) is left alone in an old rambling house.  As a storm rages outside she decides to sit and read for a while.  The book she picks up is a collection of stories by Edgar Allan Poe.

“The Case of Mr. Valdemar” While trying to escape a rapist, Lucia (Lilian Valmar), drops her newborn brother.  The child’s head hits a rock, and he dies.  The event causes Lucia to go into a catatonic state and she is put into an asylum.  Dr. Eckstrom (Narciso Ibanez Menta) hypnotizes her as a cure to her mental state.  When she awakens, she dies of shock upon realizing she is in an asylum.  Eckstrom abandons his research, in this form of therapy, until he is approached by his friend, Henry Valdemar (Osvaldo Pacheco).  Valdemar tells Eckstrom that he is dying and wants to be hypnotized in the hope that he can live longer.  The experiment does not work as planned.

"The Cask of Amontillado."  John Samivet (Narciso Ibanez Menta) and his bored wife, Teresa (Ines Moreno) live in the town of Avalon.  At the end of the growing season the town has a festival to celebrate the harvesting of the grapes.  A peddler named Maurice Falpront (Carlos Estrada) shows up at the festival.  Maurice is a dashing and charming man.  He entertains the crowd with magic tricks.  When he appeals to the crowd for someone who will give him a bed for the night John offers his extra bedroom.  Maurice accepts.  Soon after that Maurice seduces the more than amiable Teresa.  When John discovers what is going on he plans an unusual revenge for the couple.

Originally the film was titled “Obras maestras del terror” 1960 and contained three of Poe’s works; "The Case of Mr. Valdemar," "The Cask of Amontillado" and "The Tell-Tale Heart."  When the film was released in America in 1965 the distributor, Jack H. Harris, added a new soundtrack along with the dubbing.  He also removed the third story, “The Tell-Tale Heart”.  The entire film is available in Spanish on YouTube.  I believe the original Spanish version also has some additional scenes for the other two stories that are not in the dubbed version.

Even though the American dubbed film is missing one of the stories, and some other footage, it is still a decent film.  Americans have a way of taking a good film and mucking it up.  The fact that this one is reasonably good gives you an idea of how great the original must be.  Argentinean horror films are usually great.  It’s when American producers get a hold of them that they lose their powerful performances.

Narciso Ibanez Menta, who plays Dr. Eckstrom, and John Samivet was known as "the Spanish Lon Chaney".  Carlos Estrada, who plays Maurice Falpront, sued the production company wanting the film pulled.  Estrada maintained that according to his contract his name had to precede the titles and it had to be larger than anyone else’s name.