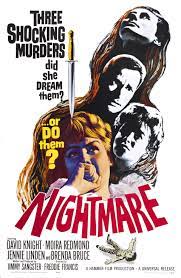 Janet (Jennie Linden) is a student at the Hatcher School for Young Ladies.  Recently she has been experiencing vivid nightmares.  On her eleventh birthday her mother stabbed her father to death.  Since then, her mother has been in an asylum for the criminally insane.  Janet’s nightmares have been upsetting the other students at the school.  The school decides that Janet should go home and get some help.  One of the school’s teachers, Miss Lewis (Brenda Bruce), accompanies Janet on the trip to her family estate, High Towers”.

With her father dead and her mother in the asylum, Janet has become the ward of Henry Baxter (David Knight).  Henry is currently away and has hired a nurse, Grace Maddox (Moira Redmond), to be her companion.  Also at the estate are the chauffeur, John (George A. Cooper) and the housekeeper Mrs. Gibbs (Irene Richmond).  Miss Lewis stays at the estate overnight and returns to the school the next day.

Janet’s nightmares continue.  In them she sees a woman who she doesn’t know.  At one point she sees the woman dead on her bed with a knife sticking out of her chest.  This episode sends Janet over the edge.  She attempts suicide by slashing her wrist.  Grace calls the doctor (John Welsh) to tend to her wounds.

The next day is Janet’s birthday.  Mrs. Gibbs wheels in a cake.  Present are Henry, Grace, the doctor and a specialist from London, Sir James Dudley (Hedger Wallace).  Also, in the back of the room, is a woman whose face is turned away.  Henry introduces her as his wife Helen.  When the woman turns around it is the face from Janet’s nightmares.  Janet screams, grabs the cake knife and stabs Helen in the chest killing her.  Janet is taken away to the asylum.

Now that Janet is locked up, and the real Helen dead, Grace discards the disguise she used to scare Janet.  With Helen out of the way Henry marries Grace.  After being married only four days Grace begins to think that Henry is cheating on her.  Henry has everything he wanted, Helen’s money and Janet’s family estate.  Henry insists on moving into High Tower.  Soon Grace begins to see strange things in the rambling house.  She feels that Henry is trying to make her go insane, just like he did with Janet.

“Nightmare” AKA “Here's the Knife, Dear: Now Use It” was released in 1964 and was directed by Freddie Francis.  It is a British mystery thriller and a psychological horror film produced by Hammer Film Productions.

This is one of Hammer’s lesser-known films.  In the middle of producing some great horror films Hammer also did some good psychological thrillers.  “Nightmare” being one of them.  The story starts out as a standard drive someone crazy movie but then adds a couple twists to the tale.  Fans of “Hush, Hush Sweet Charlotte” 1964, “Diabolique” 1955 or “Straight Jacket” 1964 will find this offering a nice part of that little subgenre.

Julie Christie was originally supposed to play the character Janet.  Christie dropped out to do the film "Darling".  She was then replaced by Jennie Linden.