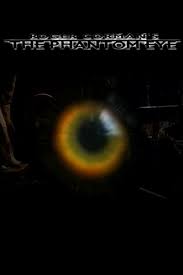 It is AMC’s Monsterfest and interns Catherine (Sarah Aldrich) and Joey (David Sean Robinson) are sent to the film library to assist Dr. Gorman (Roger Corman).  Dr. Gorman is the host of Monsterfest and must introduce the movies.  His problem is that one of them is missing.  The film, “The Phantom Eye” is scheduled to be shown at midnight.  Gorman says he searched everywhere but hasn’t been able to find the film.  He says the only place left to look is the dead storage file.  As he sends the interns to search for the film, he warns them that they must find it by midnight.  He also warns them not to come back without it or there will be serious consequences.

In the dead storage room, they split up to cover more area.  They go through separate doors and find themselves transported into scenes from various horror movies.  In each scenario they are faced with they must, using their knowledge of horror movies, first determine which horror movie they are in and then, find a way to survive.  Each time they make it out of their respective horror movies alive they are forced to go through another door and into another horror movie.

The interns are subject to various horror films at different times in the genre.  Joey finds himself in a Hammer film, “The Atomic Submarine” 1959, and a couple Roger Corman films, among others.  Catherine ends up in a vampire movie, a mummy movie as well as a silent horror film.  At each point they must determine what film they are in and how to save themselves.  At each step of the way Dr. Gorman is watching and reminding the interns that they must find their objective, the film “The Phantom Eye”.

“The Phantom Eye” was released in 1999 and was directed by Gwyneth Gibby.  In essence it is a 35-episode series shown in two-to-five-minute increments over several nights during the month of October for AMC’s Monsterfest in 1999.  At the end of Monsterfest the entire series was shown as one continuous film.  In addition to starring in the film Corman also hosted the horror movie programming for the same period and introduced the other horror films in the Monsterfest lineup.

Although the idea was an interesting one it was difficult for people to continuously watch for days just to see the next installment in between films.  Binging hadn’t been invented yet.  Watching it as one continuous movie you got the fun of trying to identify the multitude of references to movies, mostly from the fifties and sixties.  Just don’t expect it to be good cinema.  There is camp and some not so good performances, but it is all done in fun.

If you are a Roger Corman fan this is a juicy bit of fun.  Even Corman himself looks like he’s having a great time.  If you pay attention, you will also see cameos by Frank Gorshin from “Invasion of the Saucer Men” 1957, Jonathan Haze from “Little Shop of Horrors” 1960 and Michael J. Anderson from “Twin Peaks”.