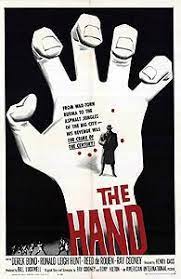 In Burma, in 1946, three British soldiers have been captured by the Japanese and are being interrogated.  The three men are Corporal George Adams (Bryan Coleman), Private Michael Brodie (Reed De Rouen) and Lieutenant Roberts.  When each man refuses to give away secrets, the Japanese cut off his right hand.

In present-day London, a policeman finds Charlie Taplow (Harold Scott) drunk in an alley.  Charlie’s right hand is missing.  The doctors at the hospital say that the amputation happened only a couple days ago.  Charlie tells the police that he sold his hand for 500 pounds.  Detective Sergeant David Pollitt (Ray Cooney) and Inspector Munyard (Ronald Leigh-Hunt) of Scotland Yard are assigned the case.  Charlie tells them what he can about the bargain, but things are a little foggy in his mind.  Not long after that Charlie disappears.  Sometime after that, Charlie’s body is fished out of the Thames.

The police only know that a man who called himself Roberts paid Charlie for his hand.  Tracing back Charlie’s movements they find that he was admitted to Allin House Nursing Home.  Eventually they learn that Charlie was admitted under the name of Roberts and that Dr. Simon Crawshaw (Garard Green) performed the surgery.  When they try to question Dr. Crawshaw, he commits suicide.

The investigation brings out the fact that someone was hunting the illusive Roberts and that Simon knew more than he was telling.  Munyard also learns that Brodie and Adams and the incident in Burma play an intricate part in the mystery.

“The Hand” was released in 1960 and was directed by Henry Cass.  It is a low budget British crime film.  The movie has aspects of the West German krimi style film.

The movie gets a little muddy in places.  The plot holes are the main reason why it gets confusing.  It’s never explained why Taplow was paid for his hand or why the hand ended up where it did.  I suspect that Taplow was a diversion.  The real Roberts was afraid for his life.  But why the hand was cut off is still up in the air.  Who actually killed Taplow is also speculative.  I also think that the opening scene in Burma should have been saved and used as a flashback much later in the film.  It would have created more suspense throughout the movie.  Instead, it just added confusion to the spotty plot.  The acting was good, but it couldn’t compensate for the plot problems.  The movie was Ok, but it could have been great.

The film starts out in 1946 and is suggesting the WWII was still going on.  In reality the Japanese officially surrendered to the allies on September 2nd, 1945, almost a month after the bombings of Hiroshima and Nagasaki.  The Burma campaign ended in August 1945 which designated the end of Japanese occupation of Burma the victory of the Allied forces and the return of Burma to British control.