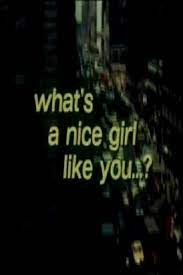 Shirley Campbel (Brenda Vaccaro) is a smart-mouthed quick-witted New Yorker from the Bronx.  She works for Mr. Morrow (Ray Ballard) at the Bushwick Plastics Company.  Her best friend, Cynthia (Jo Anne Worley), also works there.  One particular evening after work Shirley arrives home to her apartment, as she usually does.  She grabs a sandwich and starts to eat.

Shirley hears a knock at the door, when she answers it, Fats Detroit (Michael Lerner) and Francis Malone (Robert Doyle), rush in.  Malone has a gun with a silencer on it.  Fats has pictures of a young woman that looks like Shirley.  Satisfied that they have the right person they whisk her out of the apartment and hustle her into a car.  All the while Shirley is insulting the men. Fats is driving.  Shirley steps on his foot, causing him to push down on the accelerator and grabs the wheel.  The car crashes.

Shirley goes to the police station to report the kidnapping and attempted murder.  She is taken to see Lt. Joe Burton (Jack Warden).  As she is explaining to him what happened, a call comes in about the car crash.  The two goons in the car are dead.  After talking to her for a while Joe believes her and actually starts to like the tough talking cute young woman.

The next night Shirley is attacked by a hood named Selzer (Gino Con forti).  Joe arrives in time to shoot Selzer and save Shirley’s life.  While Joe is at the hospital trying to get Selzer to talk Shirley is confronted by Albert Soames (Roddy McDowell).  Albert tells her he is a Duke of a tiny country and that she looks like his cousin Carlotta.  He says that Carlotta is dead.  He also says that, since she is the spitting image of his cousin, the crooks want to use her as a pawn in an inheritance scam.  Streetwise Shirley doesn’t buy any of it.

Eventually he comes clean and tells her that she looks like a girl named Janet Stillman.  Janet died in a car crash.  Her father, Morton Stillman (Edmond O’Brien), is dying.  The old man wants to see his daughter before he goes and will pay anything.  Stillman’s employee, William Spevin (Vincent Price), wants her to pretend to be Janet so he can rip off the old man.  Shirley is told that if she doesn’t go along with the ploy, they will kill her.  Shirley is smart and pretends to go along with the scam.  In the meantime, Joe is trying to find and save her.

“What’s A Nice Girl Like You…?” was released in 1971 and was directed by Jerry Paris.  It is a made for television comedy crime mystery for the ABC movie of the week. The film was based on Howard Fast’s book “Shirley”.

There’s not a lot of plot here but there is a lot of fluff.  Most of the movie hangs on Vaccarro’s snappy one-liners and cute expressions.  As far as I’m concerned, it works.  It may not be big on suspense, but it is big on fun.

By this time, Vincent Price had been in several television show episodes and had a cameo in the television movie “Cucumber Castle”.  This would be his first made-for-Television movie.